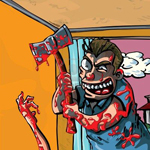 So, what do you think of my meat-hook collection? Would you mind marinating in olive oil for a bit? You’d be amazed what you can use to make lampshades. Have you ever wanted to meet God? What do you think of this stew? The meat’s really fresh. Sweeney Todd was misunderstood. Ted Bundy needed a hug, just like I need a hug.

Yes, ladies fall for these lines.

And, much to nobody’s surprise, they end up dead.

But some ladies look for safer ways to find dates. They use the internet’s safest dating sites, they go to church or, in extreme cases, they go on a dating show.

It doesn’t matter. As Lycurgus reports, China allowed a serial killer to be a contestant on a dating show.

39-year old music teacher Liu Hao was a contestant on the Chinese dating show “Happy League” in Heilongjiang province in northeast China. Using his remarkable singing talents to win the favor of a young woman, he beat out seven other bachelors, finally swaying them with his rendition of the running man to techno music.

Unfortunately for the “lucky” woman who chose him, Liu Hao is actually (well, probably) Wu Gang, a suspected serial killer responsible for the stabbing death of a man outside a restaurant in Jilin thirteen years ago.

He was detained by police after receiving an anonymous tip from a viewer who said she recognized him as the killer. Li Ang, a police officer from the criminal investigation department of the Jilin Public Security Bureau, said the resemblance to Wu Gang was indeed similar after watching the tapes.

Currently Liu Hao is the prime suspect in the case, with Li stating that he most likely became overconfident after not being apprehended after so long.

Since the news has come out, the episode starring Liu Hao has been removed from the official website for “Happy League.”

Okay, speaking as a guy, I can assure women of one thing, no straight guy who isn’t a serial killer has ever seen Running Man all the way through, let alone set it to techno.

Here’s a simple tip. If you meet a guy who does all the crap you read about in Cosmo, he’s probably a serial killer. Or lives with his mom. Sometimes both. Just learn to accept that fact and move on.