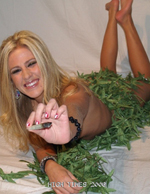 Before we begin, in an effort to maintain our journalistic transparency, I must admit that I don’t smoke pot. Like many high schoolers in the 70’s I tried it, and I most certainly inhaled, but I quickly found that my body can’t process THC, the active ingredient in marijuana, so I would develop horrible allergic reactions. Fortunately for me I had a non-judgmental doctor with a sense of humor. That being said, I have nothing against pot smokers. My ex wife is numbered among their merry band. As long as they don’t blow pot smoke in my face I’m good to go.

To be fair, I also think it should be legalized. The position that pot is the gateway drug to heroin is akin to saying Bugs Bunny cartoons are the gateway to transvestism. Some people like to unwind with a puff or 12 off of a fatty in the same way people like me enjoy a frosty cold adult libation. Neither of us a threat to society.

However, there is one difference between pot smokers and beer drinkers. In the main, when drinkers break a law, there’s a tragedy involved. When pot smokers do it, there’s laughter.

Back in April the NY Daily News reported that a pot dealer sent $50,000 worth of pot to the wrong address.

A Manhattan dentist got a mystery UPS package Friday from a real dope – it was filled with 31 pounds of very pungent pot.

Dr. Richard Lyons couldn’t believe his nose when he opened the box that was delivered to his Chinatown office.

“From my 70’s days, when I saw the green and smelled it, I knew it was marijuana,” said Lyons, whose graying ponytail could qualify him for a bit role in a Cheech and Chong movie.

Now, imagine you’re the dude who has to explain that little mix up to your boss.

I’m sure everyone will be very understanding.

But not all pot smokers are so sensitive and forgiving. UPI is reporting that one young gentleman shot his drug dealer over a delivery mix up.

A Port St. Lucie, Fla., man was arrested for allegedly robbing and shooting at a drug dealer he said gave him hamburger meat instead of pot, authorities say.

The alleged victim said he was to meet Morrison Wednesday at 8:30 p.m. behind a gas station to sell him $100 worth of marijuana. The dealer said Morrison walked up to his car and demanded the drugs. He said that he then gave Morrison a white paper bag and then sped away.

Morrison told police he looked in the bag and found hamburger meat instead of drugs and then began firing at the dealer’s car.

When police arrived at an apartment building in Port St. Lucie Thursday afternoon to arrest Morrison, he fled on foot. However was apprehended shortly, near the apartment building. Detectives said found 4.7 grams of marijuana in his possession.

Morrison was being held without bail ain the St. Lucie County Jail.

Quick question, if he was delivered hamburger meat, where did the pot come from?

Given all the things that are wrong in that story I see no reason to mention that it obviously happened in Florida.

Of course, no article about marijuana would be complete if it didn’t have a blurb grandmothers who use it to feed their rabbits.

No, they are not cross dressing rabbits. Sorry.

Police in Germany say they have caught an 84-year-old woman who had been feeding her pet rabbits with cannabis.

The pensioner was contacted by cops after they spotted a field of the metre-high pot plants growing in a field she owned next to her home.

While the elderly woman denied growing the plants herself – she says they just sprung up – she did admit using them to feed her pet rabbits. Police say this is plausible.

According to Tagesspiegel she said that no only did the rabbits really enjoy munching the plants, but because they grew back so quickly they were an ideal food.

Unsurprisingly the cops chopped down the cannabis plants and took them away in three large plastic sacks … maybe they have a rabbit hutch at the police station.

This just in, 100 stressed rabbits attacked a police station in Germany.

But, okay, so you’re smoking your weed, enjoying the buzz but you have a government grant to fulfill. What do you do? The answer is obvious. You mess around in a genetics lab and create a glow in the dark dog.

Scientists in South Korea have created a genetically modified glow in the dark dog which they say can be turned on and off like a light switch.

The glowing beagle was born two-years-ago thanks to a cloning technique which boffins claim could be used to find cures for diseases including Alzheimer’s and Parkinson’s.

Tegon’s luminosity – which can be seen under ultraviolet light – is said to be controlled by adding a doxycycline antibiotic to her food at Seoul University.

While the £2million research could lead to huge leaps in medical science, it’s already solved one of life’s great questions, are dogs or cats the brightest.

A spokesperson for the research said: “The creation of Tegon opens new horizons since the gene injected to make the dog glow can be substituted with genes that trigger fatal human diseases.”

I’m sure that there’s an error in translation there somewhere, or maybe the scientist was stoned, but I doubt that there are going to be lots of people lining up to be injected with fatal diseases.

“MOM MOM, I just went to the clinic and got Ebola!”