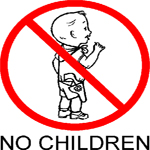 Many moons ago, a television show called WKRP in Cincinnati had an episode where Dr. Johnny Fever interviewed a, self proclaimed, child psychologist who proposed that all children under the age of 13 should be locked away in concentration camps. It was a funny bit. It may also have been prescient. Way back on July 15th I wrote about how a restaurant had banned children under the age of 6. In it I noted that this wasn’t even the first restaurant to do so. But now it seems that the floodgates have been opened. Children around the world are being denied the privilege of making our lives a living hell.

This despite the fact that some adults seem to think it is their child’s God given right to do just that. I don’t blame the kids for this turn of events, I blame their parents. Kids don’t know how to behave in public. There is no “social skills” gene that kicks in when they learn to talk. It is up to the parental units to teach their kids how to say please and thank you and to show respect to not just their elders but to all around them regardless of age. Little Timmy and Suzy aren’t going to magically learn their manners watching mommy and daddy fart on the couch while watching Wheel of Fortune.

Our regular reader, Jordan Brandes, pointed me to an article written by Piper Weiss & Shine Staff which reports that the child banning trend is starting to become entrenched.

What’s the matter with kids today and why doesn’t anyone want them around? In June, Malaysia Airlines banned babies from many of their first class cabins, prompting other major airlines to consider similar policies.

Lately, complaints about screaming kids are being taken seriously, not only by airlines, but by hotels, movie theaters, restaurants, and even grocery stores.

Earlier this month, McDain’s, a Pittsburgh area restaurant that banned kids under 6 became a mascot for the no-kids-zone movement.

According to a Pittsburgh local news poll, more than half of area residents were in favor of the ban. And now big business is paying attention.

“Brat bans could well be the next frontier in destination and leisure-product marketing,” writes Robert Klara in an article on the child-free trend in AdWeek.

Klara points to Leavethembehind.com, a travel website for kid-free vacations, with a massive list of yoga retreats, luxury resorts and bargain hotels around the world that ban children.

“Call me a grinch, a misanthrope, a DINK (dual-income-no-kids), or the anti-cute-police, but I hate (hate a thousand times over) ill-behaved children/infants/screaming banshees in upscale restaurants (ok, anywhere, really, but I don’t want any death threats),” writes Charlotte Savino on Travel and Leisure’s blog. She lists a slew of a popular destination restaurants with kid-free areas and policies for travelers looking for quiet vacation dining.

Traveling is one thing, but what about in kids’ own hometowns? Should kids been banned from local movie theaters, like they were at a recent adults-only Harry Potter screening? In Texas, one cinema chain has even flipped the model, banning kids under six altogether, except on specified “baby days”.

Even running errands with toddlers may be changing. This summer Whole Foods stores in Missouri are offering child-free shopping hours (kids are allowed inside but childcare service is available for parents who want to shop kid-free.) Meanwhile in Florida, a controversy brews over whether kids can be banned from a condominium’s outdoor area. That’s right, some people don’t even want kids outdoors.

When did kids become the equivalent of second-hand smoke? Blame a wave of childless adults with money to spare. “Empty nesters continue to wield a huge swath of discretionary spending dollars, and population dips in first-world countries mean more childless couples than ever,” writes AdWeek’s Klara.

Catering to the child-free community may be good for business but is it good for parents? It could help narrow choices and make kid-friendly environments even kid-friendlier. And let’s be honest, babies won’t miss flying first class. They won’t even remember it. But their moms and dads will.

Most parents with young children have self-imposed limits on spending and leisure. This new movement imposes limits set by the public. And the public isn’t as child-friendly as it used to be. As businesses respond to their new breed of ‘first-class’ clientele, are parents in danger of becoming second-class citizens?

Also, as my radio co-host Taylor Harris noted, it’s hard for restaurants to make money off of kids. They have cheaper menus, can’t be upsold on drinks and tend to require more clean up than adults. That would seem like all the more reason for parents to make sure that their public dining experience is pleasant.

I do understand that parents who are traveling are stuck. It’s not like they can toss a kid into their neighbor’s yard and hope their little bundles of joy can fend for themselves for a couple of weeks. And, thanks to that pesky nanny state, you can’t drug the little darlings so they’ll be quiet for the flight.

I’m not sure what the solution is for them, but there has to be an alternative to listening to a child scream bloody murder for four hours straight.

It’s really not any fun.

Sesame Street breaks it down from Wonderful Creative on Vimeo.