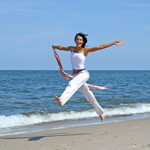 Astute readers of this blog know that I am legally single … again. Some might think that this fact makes me bitter against women. Not at all. I consider myself wiser, certainly, but I don’t own any estrogen based Vodou dolls or anything like that. Nor do I sit weeping into my beer over the inequities of life or bemoan the many trials and tribulations foisted upon men by the fairer sex. No, instead, I took some personal time to reflect on what errors I’d committed and then went on with my life. However, as I said earlier, I went forward a much wiser man.

For example, my fridge ALWAYS has milk in it. I don’t care if a woman is lactose intolerant, she’s drinking the darn milk.

The true sufferers of premenstrual syndrome? Men, if an ad campaign from the California Milk Processor Board is to be believed.

But help is on the way: The dairy group has a new marketing strategy that slyly suggests men should buy women milk to alleviate monthly symptoms in the women they love. The campaign includes billboards, a website, and radio ads that advise men on how to deal with their hormonally challenged, blame-casting wives and girlfriends. One ad shows a man holding a gallon of milk with the headline: “We can both blame myself.”

Responses on Yahoo! News have been mixed. One commenter sniped, “Udderly ridiculous.” Another gave it the thumbs-up, writing, “This ad campaign is hilarious. I don’t get why it’s considered controversial. It pokes fun at men and women.”

The board’s executive director, Steve James, said the ads are directed at helpless men: “It was certainly not meant to be offensive. None of the humor is aimed at women. The humor is aimed at how clueless men are in dealing with emotional situations.”

The science behind the ads? The Milk Board’s website points to a 1999 study from the Journal of American College of Nutrition—which had ties to the calcium manufacturer GlaxoSmithKline, according to the Associated Press. The story noted that Sheri Zidenberg-Cherr, chairwoman of the University of California, Davis Department of Nutrition, was skeptical, saying, “I’m not familiar with research supporting that relationship at this time.”

The new marketing push is not the first from the milk industry to generate controversy. A 2009 campaign launched by the Milk Board encouraged schools to serve flavored milk. Their argument: Kids who missed out on the nutrients of the white stuff would drink the sweetened beverage. Still, others argued that sugar is sugar and a contributor to childhood obesity.

School districts across the country that blew off the Milk Board message and banned the sugary drinks from their cafeterias include D.C., Boulder, Colorado, and, most recently, the Los Angeles Unified School District.

Another campaign that churned up complaints: a claim that drinking milk could make you thin. A 2006 billboard featuring a svelte Sheryl Crowe claimed, “Studies suggest that the nutrients in milk can play an important role in weight loss.” However, the studies had mixed, non-conclusive results, according to USA Today.

While the nice folks at EverythingIDoIsWrong.org seem to be trying to be helpful, they don’t actually explain how men can tell the difference from any regular day when everything they do is wrong from those special days that require milk. But I’m sure it’ll come up in a future ad.

So what does this mean for you, the male reader of this fair blog? It means you’ll be better prepared to keep your penis. At least keep it attached, which is always a good start. Jonathan Lloyd & Olsen Ebright write about the most recent example of a trend that has become frighteningly regular.

A woman was in custody Tuesday for allegedly poisoning her estranged husband, cutting off his penis with a 10-inch kitchen knife and throwing it in the garbage disposal.

Lt. Jeff Nightengale said the crime occurred Monday night at the man’s Garden Grove home. According to authorities, this was the first time police have ever been called to the home. No neighbors reported any signs of fighting or screaming.

Catherine Kieu Becker, 48, was booked for aggravated mayhem, false imprisonment, assault with a deadly weapon, administering a drug with intent to commit a felony, poisoning, and spousal abuse. She was being held at the Orange County Jail.

The woman, who was later identified as the suspect, called 911 to report a medical emergency at about 10 p.m.

“The suspect called 911 and told responding officers that he ‘deserved it,'” Nightengale said.

When officers arrived, they found the man tied to a bed and bleeding from the groin area. He told officers the woman had given him a drug in the dinner she had made for him.

Investigators said she tied him to the bed after he fell asleep. When he awoke, the woman grabbed his penis and cut it off with a 10-inch kitchen knife, according to police. She then threw it in the garbage disposal and turned on the disposal, police said.

The 51-year-old man was hospitalized at UC Irvine Medical Center in Orange. He was listed in serious condition. Pieces of the penis were taken to the hospital, but it remained unclear whether surgeons were able to reattach it.

The rope used to tie the man to the bed and a knife were seized as evidence.

Nightengale said an initial investigation indicated the two are married and going through a divorce. According to courts records, the victim filed for divorce on May 16, and is representing himself.

Milk, it does a body good! That takes on a whole new meaning for you now, doesn’t it?

Now, to be fair, some guys seem to go out of their way to earn a date with a weed whacker. For example, the professional love song writer who, when informed he’d never written his girlfriend a love song, beat the poor woman senseless. He lives in a crappy part of Pennsylvania, so I’m guessing he’s not a successful love song writer, but still …..

Because, as every guy knows, THERE IS NO WAY IN HELL you can bring this up at the bar!

“Betty cut off my penis.”

I never once claimed that men were mature.