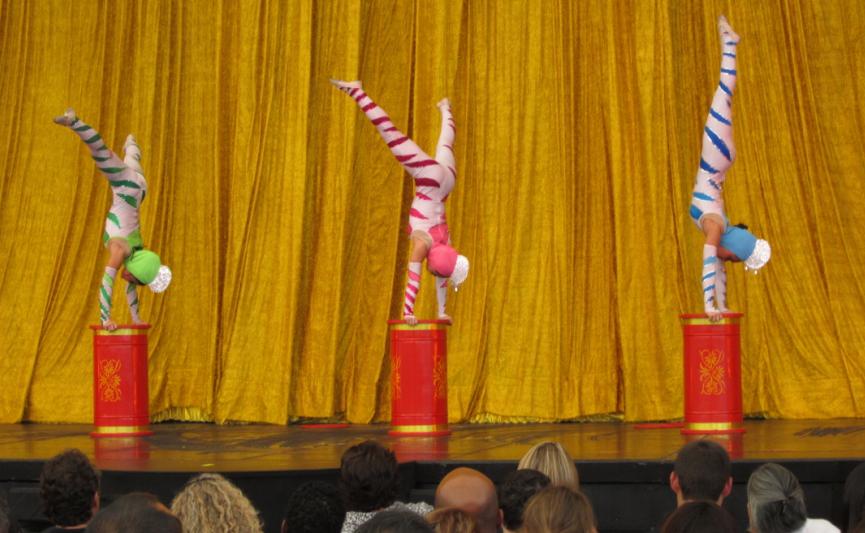 Cirque Shanghai is back this summer, but it’s even more EXTREME than you might remember. If you haven’t seen the show at the Navy Pier, than it’s a ‘must see’ this summer. It’s a perfect thing to take a date– or the entire family! You’ll laugh, you’ll gasp, you’ll be so amazed that you’ll clap uncontrollably and lean over to whoever you came with and say something like, “HOW did they do that?!?!?”

I watched these performers maneuver themselves in and out of barrels like it was no tough task. This act consisted of 3 young girls dressed in striped outfits who could clearly contort their body in any position necessary. Personally, I have trouble getting my jeans on everyday. It’s actually a pretty funny sight watching me hop around trying to get my jeans pulled up just so– and here these girls are crawling in and out of a barrel with ease. HA! Needless to say, I was in awe during this entire act. The girls were flawless, and quiet frankly their flexibility was amazing!

Another act of woman (or perhaps girls… they did look very young!) were dressed in sharp yellow leotards and were also able to do things with their bodies that I will never achieve in this lifetime. They worked together to form amazing poses and also garnered a warm round of applause.  If I could sum this performance up in a few words it’d be:

balance/poise/control/grace/holy/crap. These ladies had it all!

Now for an amazing act from the boys. “Hat Juggling!!” This was so much fun to watch… and they made it feel like I would actually be capable of doing this trick. However, they had audience participation during this portion of the show–

where they brought up 3 lucky people. I suppose the performers just make it look easy, because those lucky volunteers couldn’t juggle a hat if their lives depended on it :)!! But, it made for a great interactive part of the show. Instead of a commonly seen kick-line, these men created a “hat juggling” line. Where, in the photo above the guys were not only moving these hats from head to head, but also stepping to the right in a kick-line fashion. They were so precise, and not one person dropped their hat!!

And for the finale

, I was literally on the edge of my seat during this stunt called,  “Imperial Thunder,”  where China’s finest daredevil motorcycle troupe were basically like gerbils running on a wheel… except they were all four enclosed in a large steel globe as they sped around in upside down circles at HIGH speeds, all while managing not to collide. It was jaw dropping!!

But don’t worry! You still have time to see all these amazing acts this summer because the world premiere production will run through September 5, 2011 (Labor Day), rain or shine, at the Navy Pier® Pepsi® Skyline Stage. I love this venue because it’s a unique canopied, open-aired theater.

“Cirque Shanghai Extreme” is a brand new spectacle for audiences of all ages, featuring performers direct from China who are leaders in their craft of tumbling, juggling, balancing and more.  These acts have been hand picked from villages in China– and I’d say most of them can’t speak a lick of English. But it goes to show, that performance/dance can speak to any language.

For ticket information just click HERE. This is a must see, for the entire family. I promise you will be AMAZED  :).

I took a little video of the intro to Cirque Shanghai Extreme …. watch that quick video here:

And…. while you’re here, check out Nude Hippo’s Amy Zanglin as she tries to juggle with the Hat Juggling troupe from last summer.