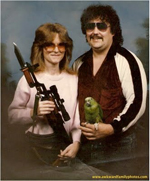 I have received emails, from time to time, saying that many of the articles I write seem to be subtle digs at the whole “Family Values” movement. Please accept my apologies. They were never meant to be subtle. I think those people are hypocritical morons. When the shining beacons of the belief system you are trying to ram down my throat are the matrimonial machinations of Britney Spears and Zsa Zsa Gabor, it’s time for someone to take a step back and rethink their position. Or, as a friend of mine once stated, “If your moral code matches that of the Taliban, you might want to try again.”

Yes, I know, I’m going to get emails written in ALL CAPS clearly explaining which level of hell I will spend eternity in. As long as people like them aren’t there, I’m fine with that.

Before we get to the point today, I’m going to start with a counterpoint. A familial relationship that works. David Moye reports on a transgendered dad, now mom, whose family loves her.

On the surface, Donna Rose is a typical 53-year-old woman.

She enjoys going on dates in her home town of Charleston, S.C., and has a successful business as an IT consultant.

Like other women her age, Rose also has a grown son, 25, with whom she has a great relationship, despite the fact he lives in Austin.

In fact, they are very likely to talk on Sunday when the son calls her up to wish her a happy Father’s Day.

That’s not a typo: Up until 1996, Rose was known as “David,” and lived life as a man. She was married for 15 years and raised a son. For a time after her reassignment surgery, she was a single parent and had to work out the proper terminology with her son.

It wasn’t an easy process but Rose insists that, despite being a woman, she will always be a dad.

“My son refers to me in different ways depending on the situation,” Rose told AOL Weird News. “If we’re with friends of his who don’t know the whole story, he might call me his mom, but if they do know, or he’s talking with my ex, than he calls me Dad.”

As Donna, Rose is more likely to wear dresses and pearls than bow ties, but she takes fathering as seriously as any other Dad.

“I love being my son’s father,” said Rose, who wrote about the transition in a 2002 book, “Wrapped In Blue: A Journey Of Discovery” (Living Legacy). “I would be seriously bent out of shape if someone came in between us and tried to take that role away from me. I taught him how to shave and play football.”

See? You love someone and they love you back and nothing else matters. It’s not a difficult concept to grasp.

Todd Wright, of MSNBC, tells of the socially acceptable hetero couple who missed their honeymoon because the wife was jailed for assault.

It’s rare for a marriage counselor to be needed at the wedding, but maybe a Broward County, Fla., couple should have started a new nuptials trend.

Bernadette Besario Catan-Keeler, 30, was arrested and accused of domestic battery just hours after she said “I do” to her newlywed husband, Mike Keeler, the Sun-Sentinel reported.

The two got into a fight Saturday night at a nightclub as they celebrated their new marital bliss, which lasted all of about 13 hours, Lighthouse Pointe police said.

The argument started when Keeler got upset that his new wife was getting too frisky on the dance floor with another man at the club, the police report stated.

Keeler left the club, but his wife soon followed and bit him on his left shoulder.

She later bit him on his right arm, the report stated. That’s when he called 911 and instead of the honeymoon suite, Catan-Keeler was in a Broward jail cell.

That fact that they’re from Florida, a leading “Family Values” state, is just a bonus.

However, had the marriage been consummated I imagine that mom would have been a lot like this NY mom who threatened her son’s little league coach and filed false abuse claims because …. I love this part …. her kid wasn’t good enough to make the team.

AOL has the complete story.

A suburban New York woman is accused of sending threatening letters to a Little League official and his son because her boy didn’t make a summer baseball travel team.

She was arraigned Sunday on charges of stalking, falsely reporting an incident and endangering the welfare of a child.

She didn’t respond to a telephone message seeking comment.

Police say when one of her two sons didn’t make the team, she wrote “letters of a threatening nature” to the official and his young son. Police say the letters also mentioned the official’s wife and daughter.

Yep, that transgendered mom is looking better and better all the time now isn’t she?

But let’s say you’re not a bad person and even try to be a good parent.

So you do all the right things, make the kids lunch, kiss their boo boos and keep them from playing with hand guns. They can still drive you nuts. Now, much to no one’s surprise, science knows why. It seems that the sound of a child whining is the most irritating noise in the universe.

If you’ve ever thought that listening to your child whine was worse than having a buzz saw cut wood inside your house, it turns out you were right.

A new study has found that the power of whining to distract people while doing simple math was even greater than other noises that people typically find annoying. It didn’t matter whether someone was a parent or not.

Still, this could explain why packing a lunch while your children caterwaul over whose magic marker can touch a particular piece of paper makes your head want to explode.

“You’re basically doing less work and doing it worse when you’re listening to the whines,” said study co-author Rosemarie Sokol Chang, a professor of psychology at SUNY New Paltz. “It doesn’t matter if you’re a man or a woman, everybody’s equally distracted.”

To ensure that people weren’t distracted by the words themselves, they used foreign language for the speech samples in the study, which was published in the Journal of Social, Evolutionary, and Cultural Psychology.

In raw numbers, people made more mistakes per math problems completed when listening to the whines than any of the other speech patterns or noises (though the only statistically significant differences were between whining, the table saw and motherese).

And people completed fewer subtraction problems when listening to the whining, crying and baby talk than when it was completely quiet.

This comes as no surprise to Eileen Wolter, who is raising a 6-year-old and nearly 3-year-old in Summit, N.J.

“My older son has this whole ‘no fair, no fair’ mantra that drives me insane, and the younger one, the minute you say ‘no’ to him over anything, he just gets crestfallen and then there are tears. There is a lot of whining,” she said.

Lately, she’s made a concerted effort to stop being so bothered by it, to simply lay out the rules and remain above the fray.

But, as a mom, she has an almost physical reaction to the noise, even if it’s just a minor argument over sharing a toy or who gets read a bedtime book first.

“It’s just really truly amazing that that’s their first instinct. It’s the first place they go. And there’s no differentiation in the scope of what’s upsetting them,” Wolter said. “My stress can’t tell the difference — it’s just the sound. I can’t tell whether this is a real emergency or a real problem. I just know that my kid is upset so I need to react.”

On some level, that seems to be the evolutionary point of the whining, Chang said. Most people would tell you ignore it, and the child will eventually stop.

While she hasn’t yet tested this theory, except with her own 2-year-old, she suspects that trying to figure out what the underlying issue is may be equally — if not more — effective.

“It’s telling you to tune in,” she said. “Nobody wants to sit around and listen to a fire engine siren either, but if you hear the siren go off, it gets your attention. It has to be annoying like that, and it’s the same with the whine.”

Yes, that is an annoying sound. I sometimes baby sit my neighbors’ two kids. They’re munchkins and cute as cute can be. When they start to whine, usually because they’re tired, I just look at them until they start laughing. Then it’s nap time. But I have heard some of their friends who I think should be the poster children for condom ads. 10 minutes with them and you’ll be thinking vasectomies sound like fun.

Speaking of condoms, Durex is getting ready to release the Viagra condom in Europe. It’s pretty much what you think it is. It enhances your staying power while preventing procreation. When I saw it (click the link to see for yourself), my first thought was “Damn, that’s so small.” Then I remembered it was for Europeans and moved on.

So I won’t leave you in a completely suicidal mood, watch the video to see a family that has fun with its foibles.