You are here: Home / Aliens or Pranksters?
Have you ever noticed how insecure people automatically assume that you share their shortcomings? If they can’t kick a soccer ball then anyone who can must be a freak of nature and therefore must either be ignored, destroyed or granted magical powers. The same applies to the ancient alien enthusiasts. Since they are too stupid or incompetent to build a simple battery (I made one as a Boy Scout, it’s not that freaking hard) then anyone who did must have had extraterrestrial assistance. Or if some ancient Egyptian noticed that birds can fly and wondered why he couldn’t too, then he must be under the control of beings from Tau Ceti C. Or she, gender actually doesn’t matter here. What does matter is that people ignore the plausible to fill in their knowledge gaps with the wildly speculative. It’s how some people went from talking about legitimately crazy Nazis to UFOs crashing all over the planet with absolutely no steps in between.

Ignoring the obvious fact that any beings intelligent enough to navigate across billions of miles of space, avoid asteroid fields and gravity wells, not to mention the occasional black hole, would have the skill set necessary to NOT CRASH INTO A FREAKING PLANET, there’s still the lack of one single bit of even the most minute evidence available to support their claims. Little kids claiming that the dog ate their homework have more credibility.

It is with these people in mind that we discuss today’s topic.

Crop circles first began appearing in the 1970s; which, coincidentally enough, was the same time that recreational drugs went from the cult underground into the mainstream. I’m sure those two events are unrelated.

In Krasnodar, Russia locals recently reported finding crop circles. Obviously the Russian educational system has gone thorugh a severe down turn since the days of Yuri Gagarin since the alleged circles (pictured below) all look like spilt milk. 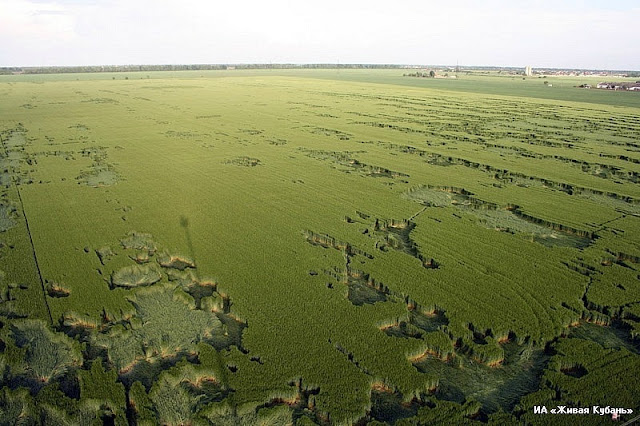 In Indonesia a much prettier set of crop circles were found and immediately attributed to UFOs.

Human experience sometimes crashes into the dynamic cosmos of the unknown and the unexplained, casting doubts but leaving little in the way of explanation.

Such is the case with this crop circle that appeared in a rice field in Indonesia.

Although reports of crop circles have occurred down through time in many parts of the world, this is the second time one has been found in Indonesia and the very first crop circle ever to be seen in a rice field.

What does it mean? No one can really say, but the phenomenon has attracted thousands of spectators, especially following rumors that the circles might have been made by a UFO.

Officials from Indonesia’s space agency and well-respected astronomers believe the circles were sculpted by human hands and all agree that a UFO, like Mae West used to say about goodness, had nothing to do with it.

Nevertheless, the 70-yard-wide crop circle is unsettling to say the very least. It resembles a flower with a very detailed and intricate pattern. Whatever it is or it isn’t, the circle has become such a popular phenomenon that police were forced to block off the area with yellow tape and villagers have started charging entrance fees!

The circle just appeared one morning in the middle of the rice paddies in Jogotirto village in the Sieman.

Who did it and why may never be known.

Still, the presence of this crop circle is enough to send a cold shiver up even the most conventional spine.

No, sorry, not even a tingle. Someone made a nice tourist attraction and will make a few bucks off of it, but that someone is neither little nor green.

The Associated Press recently reported on a much more logical explanation for a series of crop circles in Australia.

Wallabies snacking in Tasmania’s legally grown opium poppy fields are getting “high as a kite” and hopping around in circles, trampling the crops, a state official said.

Tasmania Attorney-General Lara Giddings told a budget hearing Wednesday that she had recently read about the kangaroo-like marsupials’ antics in a brief on the state’s large poppy industry. Tasmania is the world’s largest producer of legally grown opium for the pharmaceutical market.

“We have a problem with wallabies entering poppy fields, getting as high as a kite and going around in circles,” The Mercury newspaper quoted Giddings as telling the hearing. “Then they crash. We see crop circles in the poppy industry from wallabies that are high.”

But let’s say you don’t have any stoned wallabies around and you still want to make a crop circle. I know, it’s hard to believe but it could happen. Well, worry no more. The nice people at WikiHow have a nice, ten step, procedure for you to follow that even comes with legal advice in the event that some farmer decides to shoot your trespassing butt.

They also provide tips on how to make your crop circle look like it was flown in from Alpha Centauri.

For best results you should probably spend more time planning the crop circle than actually making it. By carefully planning the design, working out what equipment is needed, and discarding ideas that will be difficult or impossible to achieve, you can reduce the scope for embarrassing errors.

Use measurements scaled up from your design and a surveyors tapemeasure to subdivide your circle into parts, put posts on the points. Don’t try and guess stuff by eye as these circles usually fail.

Flatten during a dry period, to avoid churning up mud.

Walk sideways using edge of your foot to flatten corn AKA “sidestomping” when tolding tapes to do circles, this makes fatter lines easier to see.

Straight lines are created by two persons holding tape and one person “sidestomping” along the tape with it almost touching their belly.

Try to use the cover of night. Remember that ideally you should be finished by dawn, when you can take a picture of the pristine design before swarms of “croppies” come and trample all over it.

To leave a ‘weird’ crop circle of cosmic origins:

Bend some stalks around by exposing them to a blue light source for a few hours. Applying small amounts of natural gum or plaster will lock their new shape. Sadly this approach may not satisfy a detailed or scientific inspection.

Create swirled nests in the flattened areas by your clever weaving of stalks.

Also, melt some iron filings into droplets on site and sprinkle them around the flattened area to leave ‘meteorite particles’ and magnetized stalks.

Try varying the direction you flatten the corn, wavy lines or up a line then back a line. This creates amazing shiny lay patterns visible from the air.

So there you have it. The next time someone tells you that UFOs are responsible for crop circles or that you need a tinfoil hat to keep the aliens away, you may feel free to ask them not to procreate.

In fact, you should demand it.