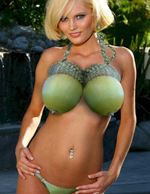 The only swim wear in the history of humanity to be inspired by an atomic explosion, the bikini has become the most popular swimsuit on the planet. Originally it was more akin to a tube top with straps and a pair of Daisy Dukes. Since then the bikini has evolved into a combination of sexy and fun. Although most suits are relatively traditional, a cute top and a bottom, and worn by a wide variety of people there are many wild variations that can either cause you to seek therapy or just laugh out loud. Far from the exclusive purview of fallen women and French harlots now it’s worn by fine, upstanding, women of pure morals like our very own Amy Zanglin and Ashley Lobo.

It’s also worn by a few disturbed men, but I’m going to ignore them so I can keep my breakfast down.

Of course, no Nude Hippo article about bikinis would be complete if we didn’t have a legitimate bikini zombie attack.

Police in Connecticut said they were called by a resident who was “alarmed” by a group of bikini-clad women taking pictures in zombie makeup.

Enfield police said they received a call at about 5:15 p.m. Sunday from a Mathewson Street resident who said he was “alarmed” by the group of about 15 young women wearing bikinis and zombie makeup, The Hartford Courant reported Monday.

Police said they spoke to the women about the complaint and they voluntarily moved to another street. The women told officers they were Six Flags makeup artists performing a photo shoot for a calendar.

Why can’t any of our Six Flag visits feature bikini clad zombies? All we ever get is Bugs Bunny, and he’s afraid of me.

Do you know how embarrassing it is to have a restraining order from a walking puppet?

Anyway, back on point, as most of you are aware, all great ideas involve beer. This next one is no exception. Rachel Elbaum tells of an inventor who wanted to power a bikini so it could keep his beer cold.

God, I love this country.

Tired of your MP3 player running out of juice at the beach? Cross that frustration off your list this summer thanks to the Solar Bikini, the high-tech bathing suit that can charge your MP3 player or other small devices while you relax in the sun.

Unfortunately, you can’t exactly pick up this baby in time for a quick getaway this weekend. Each suit needs to be custom ordered, handmade and can take more than 80 hours to create.

The bikini doesn’t weigh anymore than a regular bathing suit even with 40 solar cells attached, although the price tag is heavy: It sells for $500 and $1,500 at SolarCoterie.com.

The bikini comes with a standard USB hook-up and can power small devices like MP3 players and cameras.

“It was the first day of school and we were going around the table brainstorming ideas for sustainable products. I didn’t really have anything exciting so I leaned over to my friend and just jokingly said that I was going to make a bikini that could cool your beer at the beach,” says Schneider. “We laughed about it, but a few weeks later I realized that it was very much possible from a technical standpoint.”

While the bikini didn’t have enough solar cells to cool a beer, it was able to power smaller devices. But Schneider hasn’t given up his dream of creating a beer-cooling swim suit. He is now working on the iDrink, swim trunks for men that can cool one beer in a custom cozy. Cold beer, groovy tunes, what else do you need at the beach? Cheers!

First off, if you’ve got a couple of grand to toss away on something like this, save yourself the public humiliation and just PayPal that amount to info@nudehippo.com. We’ll come up with lots of fun things to do with it and, if you’re nice, we’ll even give you a tax deductible receipt.