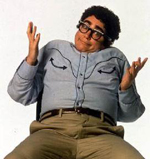 Every now and then people come up with an idea that’s so incredibly dense, so obtuse, that it requires an immediate face-palm upon hearing it. For example, a man once invented a glass hammer. You’re smart, you can see the possible problems with that. Kind of like a concrete parachute. Or how about the wonderful people who invented water soluble swim wear? Sure it’s lightweight and cheap, but would you like to be diving into a pool and suddenly find yourself doing your best Lady Godiva impression? Granted, spectators (such as me) might appreciate your efforts, but still ….

And we can never forget the genius who wanted to prove how manly men could be and invented sand covered toilet paper. Sorry, there’s not enough testosterone on the planet to get me to try that particular item.

But as dumb as those things may be you can avoid them. There are some things you can’t avoid. When you take a shower and catch a glimpse of yourself in a mirror, I doubt you’re confused as to what your gender is. I know I’ve never once caught myself wondering if I was girl. I did once wear a dress to impress a girl. But that had specific consequences that would cause any man to say, “She did that? Yeah, I’d do it for that.”

In other words, even in my one time drag experience, I never doubted I was a man. And, for the record, neither did she.

Yet, some people will try and deny anything, including their gender. And if they can’t do that, they’ll deny their child’s. Four years ago a couple in Sweden named their child Pop and refused to disclose its gender. They said they were doing this to support the feminist movement. These people are what the scientific community calls clueless idiots. Feminism is about empowering woman (GOOD IDEA!), not neutering men (BAD IDEA!).

Just FYI, they stopped giving media updates about two years ago. My guess is that the kid finally figured out what its gender is and ruined all their fun. He/she would have been about the right age.

Nevertheless, unrestrained by the bonds of common sense, a Canadian couple has done the same thing and inflicted the name Storm upon their hapless spawn. Tom Blackwell, from the Montreal Gazette, has the whole story.

It is nothing if not an unorthodox approach to child rearing: A Toronto couple says it is trying to raise a genderless child, refusing to reveal baby Storm’s sex to encourage a more neutral approach to the infant.

Hiding the 4-month-old’s sex from the outside world is a “tribute to freedom and choice” that they hope will let Storm grow up unfettered by the values of others, Kathy Witterick and David Stocker have been quoted as saying.

Experts, however, question whether the odd experiment will work or be good for the baby, and note that gender identity is a complex, mysterious force that has at least as much to do with biological factors present at birth as the person’s social interactions.

In fact, there is little hard, scientific data on exactly what does make people feel and act like a boy or a girl, but some evidence points to gender identity being hard-wired, says Michele Angello, a U.S. psychologist.

Angello specializes in helping “gender-variant” people – those born with the body of one sex but convinced they are the other. Many go on to have sex-change operations. The way people act toward them certainly affects how they feel about themselves; whether it actually moulds their identity to start with is another question, she said.

She said it is certainly important for parents to support children who do not conform to the stereotypical behaviour of their physical sex, but suggested that the Toronto parents may be veering too far toward neutrality.

“Many people feel forced to raise their kids in a certain way because they are one or the other gender,” she said.

“Then we go to the other extreme, where there is no such thing as gender, which is not necessarily living in the real world.”

Other experts in the area say the idea is unlikely to do any harm, but will soon become next to impossible to keep going. All say it is important to discourage stereotyping that, for instance, pressures women to avoid certain careers or discourages boys from pursuing certain activities deemed feminine.

Witterick and Stocker’s project with Storm was featured at length last weekend in the pages of the Toronto Star, sparking a largely negative response from the publication’s readership.

The couple could not be reached for comment. According to the report, though, they have striven to curb the impact of sexual stereotyping on their two sons, Jazz, 5, and Kio, 2, as well, encouraging them to choose clothes and playthings that are sometimes less than boyish. Jazz loves to paint his fingernails and wear pink. Kio, like his brother, is sometimes mistaken for a girl, the Star said.

It’s one thing to teach your child to have an open mind. In fact it’s probably a good idea. There’s nothing wrong with being tolerant of others or exploring realms of your own personality that can lead to exciting new concepts. People have known that ever since the first Uni-Sex hair salons popped up in the 70’s.

But the way we are born is an integral part of who we are. Denying one’s sexuality is about as useful as denying there’s air. You can’t escape it and live.