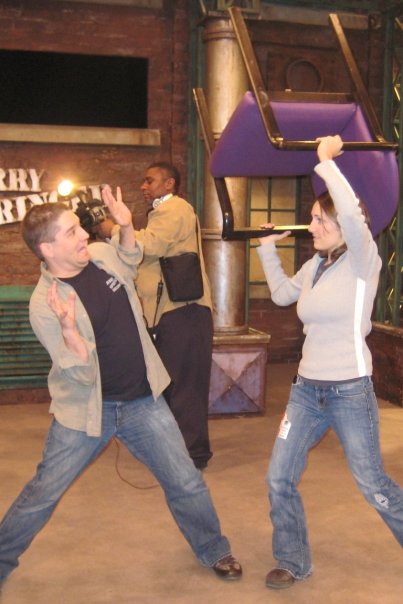 Now that Oprah Winfrey has said her goodbyes and is packing up for Los Angeles, we no longer have a national broadcast talk show coming from Chicago.  Phil Donahue may have been the first one, but then there was Jenny Jones, Jerry Springer and even Danny Bonaduce had a show…but wait….Jerry is still around…he just left Chicago for a tax-break in Stamford, Connecticut.  Now in his 20th year, he is as irrelevant as he ever was.  You can catch him every morning at 3 am on WCIU-TV, The U, Channel 26.  (Another broadcast airs at 11 am, but unless you have a job, that is too early to watch it then)

Years ago, I got in on the fun and just plain silliness that took place behind the scenes of The Jerry Springer Show…which comes off as a circus on TV, but it takes a lot of hard work to make that all happen…Well, at least for everyone, except Jerry.  He gets by on just his good looks alone. Honestly, I’ve always found Jerry to be funny, smart and pretty normal.

This is a never-before-seen segment of my coverage of The Jerry Springer Show.  For the first time ever, JERRY SPRINGER GETS NUDE!!!  (Ah, OK, I think that concept worked better with Carmen Electra or Ginger Zee…So, um, sorry!)

Click here to watch a bonus uncut portion of my conversation with Jerry Springer.