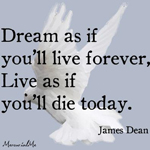 As Wowbagger the Infinitely Prolonged discovered not everyone’s lucky enough to ascertain the right mixture with an irrational particle accelerator, a liquid lunch, and a pair of rubber bands. In other words, as far as we know, humans are mortal. But what would happen to us if we could achieve immortality? Or, at least, greatly extended lives? Jack McDevitt, in his book Polaris, postulates that those who are granted this ‘gift’ would be forced to segregate themselves from society in order not to cause long term animosity. That makes a rough sense. After all, if you knew that you were going to live 70 or so years and your neighbor was going to live 10 times that or more, you might feel a little cheated. And while Asimov may have believed that “violence is the last refuge of the incompetent,” you and I both know that there’d be people with torches and pitchforks demanding that they too get what their neighbor’s got or there’d be hell to pay.

Nevertheless, given the holiday, it seems appropriate to take look at what strides science has made in attempting to ascertain immortality. Jennifer Viegas, from Discovery News Online, says they know more than you might have guessed.

Some animals and plants that reproduce asexually “can in principle achieve essentially eternal life,” according to a University of Gothenburg press release.

Scientists at the university are studying such species to find out how they avoid aging. So far, one chemical appears to be key: telomerase. This is an enzyme that protects DNA. It is more active in the longest-lived people, so its benefits likely extend throughout the animal kingdom.

The animals that can possibly achieve immortality under ideal conditions, such as sea squirts, certain corals, Hydra, and Turritopsis nutricula (the immortal jellyfish), often activate telomerase. Helen Nilsson Sköld of the Department of Marine Ecology, University of Gothenburg, and colleague Matthias Obst are studying sea squirts and starfish to learn more about how these marine creatures seem to ward off aging.

Out of the animal immortality A-list, sea squirts and starfish have genes that most closely resemble those of humans.

“Animals that clone themselves, in which part of an individual’s body is passed on to the next generations, have particularly interesting conditions related to remaining in good health to persist,” Sköld was quoted as saying in the press release. “This makes it useful to study these animals in order to understand mechanisms of aging in humans.”

“My research has shown that sea squirts rejuvenate themselves by activating the enzyme telomerase, and in this way extending their chromosomes and protecting their DNA,” she added. “They also have a special ability to discard ‘junk’ from their cells. Older parts of the animal are quite simply broken down, and are then partially recycled when new and healthy parts grow out from the adult bodies.”

Starfish are also amazingly immune to problems that affect the rest of us. If they lose a body part, for example, many species can simply grow another one. Reproduction involves tearing apart their bodies, somewhat akin to growing a new plant from a broken off piece of a “mother plant.”

Eternal life, from an evolutionary standpoint, however, has a big drawback. Due to asexual reproduction, the species as a whole retains very low genetic variation. This means they could be particularly vulnerable to climate change and not enjoy immortality after all.

Scientists are therefore rushing to study such species, which may hold the secrets of increasing our own longevity. It would be a colossal human mistake if our pollution, habitat encroachment and other activities erased our chances of learning more about nature’s anti-aging secrets.

I don’t think the universe is ready for a clone of me. It has enough issues with the single version.

Nevertheless, above and beyond all of that, you should know that scientists have already genetically engineered a mouse to grow younger. The mouse had been designed to grow older faster than normal so scientists could address issues with aging but then they reactivated the aforementioned enzyme telomeres and the little critter’s organs and muscles returned to youthful vigor.

Moreover, they’re studying a 17 year old girl who, thanks to a very rare disease, stopped aging around the age of 1. I’m not sure I’d want to spend eternity as an infant, but that doesn’t seem to be the final goal.

One advantage of a greatly extended life span would be having the chance to truly get to know the people in my life. For example, I could find out why Ian O’Neill – whose kind permission allows me to rummage through Discovery’s science archives every Sunday – is a big fan of trance music. Or, maybe, I could have the time to get to know each and everyone of you.

That would be nice.

I’d like to take this moment to wish all of our Christian readers a Happy Easter and, since I’m also a fan of trance music, I’d like to share one of my favorites with the class.