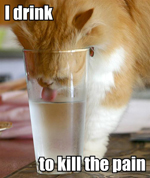 Today is a wildly popular day celebrated with festive parties the world over. As many enlightened citizens of our global village know, today’s the birthday of Austria’s most famous vegetarian artist, Adolf Hitler. While one would think, with Austria’s rich history of wonderful beer halls (several of which have had me crawl out of them), that there would be some use of history’s most legendary hops fueled beverage in the ceremonies, it turns out that isn’t the case. For reasons that can only be explained in a wafting cloud of smoke imbued with a Grateful Dead soundtrack, it seems that a certain segment of society celebrates the day by smoking a ton of weed. Don’t get me wrong, I love pot heads. They’re fun to be around. If you really want to have a good time, catch a pot head after they’ve smoked a fatty, hold up your hand and say, in your most serious voice, “thumb.” You can keep that up for hours. It’s like giving a puppy a ball with a bell inside. And just like that ball, the novelty wears off sooner rather than later.

Okay, I’m kidding. The guys who started 4:20 as a celebration of marijuana tended to skip a lot of school back in the day. It’s doubtful they even heard of Hitler. Anyway, George Mathis has some info on the 420 phenomena.

But, there’s another kind of homegrown getting buzz on April 20, referred to as “Marijuana Freedom Day” by many marijuana smokers and NORML, the National Organization for the Reform of Marijuana Laws.

I’ve only smoked when I’ve lost a bet (curse you Kent Hrbek!), and, like Clinton, I didn’t inhale. But, I am continually surprised by old college chums who have yet to give up the habit.

Say what you will about pot smokers, but they are a dedicated sort, and don’t seem to cause as much trouble as imbibers of legal drink. I’ve been tracking crime news for quite a while, and I don’t recall anything akin to the mayhem promised in “Reefer Madness.”

Originally, 420 referred to a time of day, not a calendar date.

According to Wikipedia, the term was crafted by a group of teenagers in California way back in 1971. The group, who called themselves “The Waldos,” coined the phrase “4:20 Louis” as shorthand for a 4:20 p.m. meeting at a statue of Louis Pasteur at San Rafael High School.

The term didn’t get national play until 1998, when High Times Magazine wrote an article about The Waldos.

How are people celebrating today?

In California, medical marijuana dispensaries are offering “Old School” prices and expect to double their number of customers.

One dispensary is offering free weed.

“420 is the appreciation of the medicine and what it is and what it does,” said Tyler Grant, with Emerald Pathway in Fort Collins, Colo. “And it brings people together, kind of like St. Patrick’s Day.”

Unsurprisingly, lots of colleges will be the site of unofficial observances. Details were … sketchy.

The funny thing about “The Waldos” is that they demanded that only pseudonyms be used in the original High Times article, and the subsequent Huffington Post “ton of weed” article that I linked to in the first paragraph, and then turned around and opened a website, that was clearly designed by a stoner, and posted their pictures on it.

“DUUUUUUDE! I thought anonymous meant, like, you know, messy.”

But what about those of us who don’t partake in nature’s gift? Melissa Dahl at Body Odd, says not to worry. You can get the same happy feelings by hitting your foot with a hammer and swearing up a storm.

Next time you stub your toe, go ahead and let those four-letter words fly. Cursing actually does help dull our perception of pain, research suggests.

In the study, researchers from the UK’s Keele University asked participants for five words they’d likely use after hitting their thumb with a hammer; the first word listed would be their go-to profanity during the experiment. (They were also asked to list five boring words — ones they’d use to describe a table.)

Participants were then instructed to submerge their unclenched hand in a container of 41-degree water, and keep it there — while repeatedly cursing — for as long as they could. Before and after plunging their hands into the chilly water, their heart rate was recorded. And after they could no longer stand the cold temperature, they were asked to rate the amount of pain they were in, too.

What’s surprising is that the researchers had thought that swearing would make the cold water feel much colder, lowering the participants’ tolerance for pain and heightening their perception of it. “In fact, the opposite occurred — people withstood a moderately to strongly painful stimulus for significantly longer if they repeated a swear word rather than a nonswear word,” write the team, led by Keele University psychologist Richard Stephens, in the journal Neuroreport.

From the way participants’ heart rates accelerated post-swearing, the psychologists believed their fight-or-flight response had been activated — that may be because cursing can amp up feelings of aggression. (Think of a bunch of rowdy NFL players psyching each other up before a big game.)

Interestingly, women reported feeling less pain after swearing a blue streak. (Hilariously, the researchers report that cussing “did not increase pain tolerance in males with a tendency to catastrophise.” That’s the polite British way of saying some of the boys were total drama queens.)

Has your own research already proven that a few well-timed swear words can soothe a stubbed toe? Do tell.

I know that I’ve used the occasional colorful colloquialism to express my inner me. I know that, more often than not, I’ve felt much better when done.

Well, however you mend the pain of your day, I hope you have the sense not to drive after you’ve done so. There’s nothing worse than being pulled over for driving while in foot pain