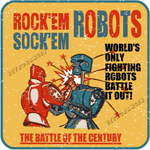 I woke up this morning, which – given the alternative – is always a pleasant revelation, and discovered that my cats had pulled all of the power sockets out of the wall in my living room. Why they had done this is beyond my ken, but it did give me pause to note that half my apartment was without power. It isn’t like the electric company shuts you off one room at a time. And certainly not in the middle of the night. Nope, when they come by they shut you off like ripping off a band aid. One second it’s there, the next it’s not and you’re left with a painful stinging sensation. None of this is relevant to today’s post, I just felt like sharing.

Another thing that’s not relevant to today’s blog, but is funny as heck, is the story of a 64 year old Florida woman (where else?) who led police on a merry chase but took time to out to hit the drive-thru at McDonald’s. The fact that she was able to do this and elude police in the drive-thru lane tells you all you need to know about the competency of the police in Florida. They did finally catch her when they combined the forces of several counties.

Reading the above makes me think that maybe humans have become superfluous. Clearly, if she’s an example of the pinnacle of evolution, then maybe a do over is in the works.

Ben Muessig reports that an Australian had a similar idea. Unlike most ideas that die in a bar, he actually went and did something about it. He’s teaching robots to box.

Science fiction writers have long imagined the day when robots will rise up and attack humans. It’s safe to say that none of them pictured it looking anything like this.

“This is an automated sparring apparatus that is heaps of fun; it looks and feels like you’re challenging a real fighter,” Punching Pro inventor Kris Tressider wrote on his website.

Even though the robot is made from parts that include steel and golf cart wheels, Tressider says its arms closely replicate human punching mechanics. That means it offers boxers a great opportunity to practice their combinations — and their bobbing and weaving — without having to face another fighter in the ring.

“You can experiment with offensive strategies, defensive positions and counter punching moves, whilst being physically trained to stay agile and keep your guard,” he wrote. “You get an extreme upper body workout that will improve your technique.”

Tressider got interested in boxing as a means of keeping fit, but he got bored with slugging the punching bag he had hung outside his home, according to Australian TV show “The New Inventors.”

So he decided to build a punching bag that punches back.

The result is a fighting robot that is highly customizable. Depending on a boxer’s height and weight class, fighters can make the android taller or shorter before sparring.

Users can also adjust the Punching Pro’s strength, speed and agility — and with an additional motor they can train the bot to throw different kinds of punches, such as hooks and jabs.

Punching Pro can take a pounding, thanks to its cushioned torso and spring-loaded neck.

“I have made recent modifications to the drive system to make the arms a lot more flexible and able to take a lot more punishment,” Tressider told Gizmag. “The next step is to start working on the software side of things so that it can change modes automatically.”

Tressider is seeking investors interested in helping him transform his robot from a contender into a champ. He hopes to sell the finished product for less than $1,000.

It was bad enough when robots learned how to play air hockey, thus giving them the basic skills required to fly planes, drive cars and so on. Now that they can punch our lights out they’re one step closer to realizing Frank Herbert’s dystopian machine ruled universe.

In other words, what could possibly go wrong?