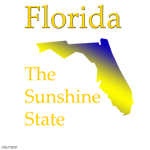 As my more astute readers will know I have, on occasion, written about Florida, the Sunshine State. The State that’s given the world the rabidly homophobic Anita Bryant, celebrates a virulent anti-Semite with an amusement park and actually required a law to prevent people from molesting trash cans. Granted, it also gave us Dave Barry, but that almost seems to be an accident of birth by now. Florida is, without a doubt, a beautiful state with glorious coastlines and stunning wild life. And I’m not just talking about the mutant cockroaches. In fact, in many ways it would be idyllic if it weren’t for the people who live there.

While an Oregon Appeals Court was recently forced to rule that teeth are not a dangerous weapon, a WalMart in Florida seems hell bent on proving the esteemed justices wrong. As reported by Brian Hamacher, one lady bit the finger tips off of another lady in a dispute over a hot guy who works there.

A Florida Walmart worker who suspected her co-worker of sleeping with her husband was arrested after she allegedly attacked the other woman and bit off part of her finger at the supercenter’s parking lot.

Clodia Coicour, 43, was arrested Monday on a charge of aggressive battery with great bodily harm causing permanent disfigurement for the bloody brawl at an East Naples Walmart, according to naplesnews.com.

The victim told Collier County deputies that she was leaving work around 7 a.m. when she was suddenly attacked by Coicour near her car.

She told police Coicour threw a spicy substance — possibly pepper spray — in her face, which burned her eyes before Coicour set upon her and bit off the tip of her right ring finger.

Coicour later told deputies that she attacked the woman because she’d heard a rumor she was having an affair with her husband, who also works at Walmart.

The husband and the victim denied the affair to police.

Well, it is Florida after all. Who needs things like facts or proof when it’s much quicker just to run up to someone and bite their fingers off? And, forgive me for asking, but why wouldn’t she confront her husband? If he was doing the horizontal bop with someone other than his lawfully wedded wife shouldn’t he shoulder the blame? At least some of it?

Well, maybe this little time out will help them grow stronger as a couple.

I doubt it, but hope does spring eternal.

Nevertheless, nothing screams FAMILY VALUES better than a heartwarming story about a mother and her son who rob convenience stores together. Ben Muessig tells the touching tale.

Police in Florida say they locked up a 20-year-old convenience store robber who used his mother as his getaway driver.

Investigators claim Angelo J. Palmieri walked into a Cumberland Farms store in St. Cloud at around 4 a.m. Wednesday and demanded cash while indicating he was carrying a weapon, the Orlando Sentinel reports.

“Don’t call the law, there will be no problems,” the perp stated, according to the clerk who called 911.

The employee handed over an undisclosed amount of cash, and the suspect fled to the parking lot — where he allegedly hopped into a car driven by his mother, 47-year-old Cindy M. Willison.

When officers pulled over the mother and son, Palmieri reportedly attempted to flee, but officers managed to take him into custody.

Both have been charged with robbery with a firearm, according to reports posted on the Osceola County Corrections Department’s website. Palmieri was also hit with charges of escape and resisting arrest without violence.

I bet you’re tearing up right now. Go ahead, get a hankie, I’ll wait.

Now, the first thing you’ll notice, when you click Ben’s link, is that the genius who robbed the store did so shirtless. This makes the umpteenth Floridian mug shot I’ve seen with a topless dude so I have to ask; What could possibly be the mind set here?

“Whoa! I’m getting ready to rob this place. I don’t want that 6 ounces of fake cotton to slow me down!”

And given that this is a state that allows, some might say ‘encourages,’ business owners to keep loaded firearms on their premises, making yourself a glow in the dark target just doesn’t seem like the best thought out plan.

Then again, anyone who needs their mom to drive the getaway car probably didn’t make it much past grammar school anyway. So I’m guessing that he was a product spawned in the shallow end of the gene pool.

Oh well, nothing to do now but kick back and listen to Chicago’s very own, Round Mound of Chocolate Sound (TM), Darryl Pandy sing about Sunshine and Happiness.