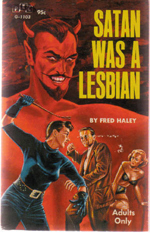 It’s not a good week to be the Lord of the Underworld. As anyone who ever saw SPAWN knows, the level of recruits who want to worship Beelzebub isn’t exactly awe inspiring. God gets the likes of Andrew Carnegie, a man who used his vast wealth to, almost, singlehandedly kick start the public education system in America. Satan gets … well, Satan gets the folks you’re going to meet today. Suffice it to say these are not the sort of people who are going to be founding schools. Actually, I’d hazard a guess that they couldn’t spell school even if they were spotted two o’s and an h. And the s and the c. You can even toss in a rhyming word and you’ll still get blank stares.

The history of Satan in modern culture is a fascinating read, but essentially irrelevant to our article today. Finding out that the name Lucifer actually is a noun referring to the planet Venus and has nothing to do with the personification of evil is fun to know, but doesn’t even begin to remotely help you understand these people. The problem is that the people I’m writing about here today not only wouldn’t know any of this stuff, they wouldn’t understand if you tried to explain it.

Not even the easy stuff.

Rikki King starts our day off with a man who tried to burn down his hotel room because Satan was his room mate.

Convinced that he was sharing a motel room with Satan, a man set his blankets ablaze in Lynnwood on Friday, according to what he told police.

The man, 52, of Redmond, had been staying at the Days Inn on 196th Street SW for about a month, according to a police affidavit filed in Snohomish County Superior Court.

Fire crews were called about 8:30 a.m. Friday when smoke began pouring out of the second floor room where the man was staying.

The fire was contained to one room because of fire sprinklers, officials said. About six rooms were damaged in all, as well as guests’ personal property.

The man told police that he set the room on fire because Satan was in there, according to the affidavit. He reportedly said he wanted to protect “the good people” by setting the fire.

The investigation showed that flames began in the room in at least four different places, including the blankets.

Hotel management had asked the man to move out the day of the fire.

The man was being held Monday at Snohomish County Jail for investigation of first-degree arson. Police who searched his room after the fire found two bottles of lighter fluid, records show.

The case remains under investigation by Lynnwood police. No injuries were reported.

And I’m sure you’ll agree that he has no issues with reality at all.

But at least you can kind of follow the logic of his deed. A little Hell on earth to remove the core of all evil and all that.

I didn’t say it was good logic, just that you could follow it.

And, when all is said and done, he was trying to do some good.

Which, obviously, brings up that old bromide about the road to hell and good intentions.

However, sometimes it’s clear that Satan’s taking the rap for stuff he really had nothing to do with.

Weird News tells us about a nice lady who ripped off a church and who blames Satan for helping her forge checks.

You’d think that the epitome of all evil could have come up with a better plan.

She said the devil made her do it.

An Arlington woman, 62, told detectives evil was at work when she allegedly forged more than $73,000 worth of checks to herself from the church where she was an administrative assistant.

The woman worked for the Arlington Free Methodist Church from early 2000 until Feb. 2008 when she was fired, the court papers said.

On June 6, the woman left a teary message for an Arlington police detective admitting she had stolen money from her former employer. During an investigation, police learned that from Jan. 2005 until the end of Feb. 2008, the woman wrote 80 checks worth $73,575.18, the papers said. She allegedly forged the pastor’s signature.

The finance chairman of the church had noticed irregularities with the checks and alerted the pastor. Church elders had been reviewing the matter when police contacted the pastor.

The woman told detectives she used the money to cover household expenses. She said she couldn’t stand the thought of losing her home, the documents said.

Detectives said the woman seemed relieved the theft was disclosed and she appeared remorseful. She told police she was ready to face the consequences for her actions, the documents said.

The woman tried to enroll in a court program to pay restitution and avoid charges. But the amount she owed far exceeded what she would be capable of paying back in the short amount of time allowed, Blake wrote.

On Wednesday, the woman was charged with first-degree theft, a felony.

Household expenses? Where did she live? The Taj Mahal?

The sad thing is that money was supposed to be used to help people and it’s gone.

Hmm, looking at the result, maybe the devil really did make her do it.