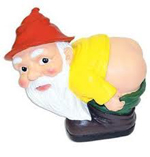 First off, if you feel the need to make fun of Florida again, click here. It has nothing to do with today’s post, but some things are just too funny not to share. On a more selfish note, I’m pleased to report that all of my friends in Japan are alive and well. One did lose a house, but his family all made it to safety and that, when all is said and done, is the most important thing. Especially when you consider that the quake actually picked the entire country up and moved it 8 feet. Some experts are even saying that the Earth was moved about 4 inches off its axis.

Anyway, some people have said that I’ve been a little too serious up here lately. I can see that. I’ve had a lot on my mind and much of the news these days hasn’t lent itself to hilarity. So it is with unbridled glee and a song in my heart that I report to you now that you can begin doing your happy dance again.

At least for 6 days. Because that’s when the moon is going to crash into Earth and exterminate all life as we know it. And even some we don’t know.

Oh, wait, this just in: I have no idea what I’m talking about. Lee Spiegel reports that the moon’s just going to get a little closer and wave hello.

Well, that’s all right then, isn’t it?

On that night, the full moon will be at lunar perigee, the nearest approach in its orbit around Earth. But in this case, it will be at its closest proximity to us in 18 years, reports Life’s Little Mysteries, Space.com’s sister site.

With our neighboring satellite scheduled to light up the sky from only 221,567 miles away, some are wondering if its close proximity will cause any unexpected problems back on Earth.

We all know, most likely from elementary school science or episodes of “Nova,” that the moon’s gravitational pull on our home planet affects the ocean tides. But with the upcoming extreme closeness of the moon, will any tide increases trigger other possible problems, such as earthquakes?

“A lot of studies have been done on this kind of thing by USGS scientists and others,” said John Bellini, a U.S Geological Survey geophysicist. “They haven’t found anything significant at all.”

And according to John Vidale a seismologist at the University of Washington in Seattle, we’ll never notice anything different about next week’s lunar perigee. “It’s somewhere between ‘it has no effect’ and ‘it’s so small you don’t see any effect.’ ”

In case you prefer to plan your life according to the movements and positions of the moon, sun and planets, renowned astrologer Richard Nolle lays claim to the term “supermoon” on his Astropro website.

Nolle agrees with the majority of scientists that the March 19 supermoon event isn’t likely to be, literally, Earth-shattering.

“It won’t be the case that all hell will break loose all over the world,” he wrote.

“The worst that can happen, if the worst doesn’t happen, is that you end up with a stock of fresh batteries and candles, some extra bottled water and canned goods, maybe a full tank of gas and an evacuation bag packed just in case.”

At the very least, when the moon rises at sunset in the early evening of March 19, it’ll probably produce a great photo op.

Now, if only someone could explain to me why all these scientists are lining up two by two near a space ark, I’d feel much better.