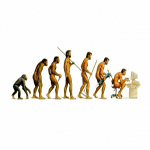 When people discuss evolution they tend to fall into two distinct groups. Those who think we came from apes and those who paid attention in school. Darwin was very clear that while apes may be our cousins, they aren’t our grandparents. But, just to keep you entertained, I should note that humans have more directly in common with apes than we do with Neanderthal man. Although it seems that genetic stuff we did have in common with our odd and extinct cousins did allow us to intermarry or, at least, get in some interspecies boinking and is the reason that the descendants of Eurasions and Africans developed differently. Despite some very bad fiction, there’s no truth that man has ever interbred with apes. Or monkeys. Or baboons. Or ….. oh heck, you can figure it out.

Julie Steenhuysen at MSNBC’s science desk, takes a look how we got big brains and why men don’t have fingernail-like growths on their penises.

I bet you never even contemplated that last one.

Missing chunks of DNA responsible for turning genes on and off help explain some key differences between chimpanzees and humans — including why humans have big brains and why the human penis is not covered with prickly spines, U.S. researchers said on Wednesday.

The study, published in the journal Nature, reinforces the notion that genes that control the activity of other genes play a big role in what makes humans so different from other mammals.

To study this, David Kingsley of the Howard Hughes Medical Institute and Stanford University School of Medicine in California and colleagues compared the genetic code of humans to chimpanzees — man’s closest relative — and other mammals.

They found 510 gene segments that are present in chimps and other mammals, but are missing in humans.

Nearly all of these were regulatory genes — genetic switches that turn up or down the volume of nearby genes.

Then the team did a computer analysis to identify deleted DNA segments that were clustered around particular genes.

“We saw more changes than you would expect near genes involved in steroid hormone signaling,” Kingsley said in a statement.

A number of deletions also appeared near genes involved in brain development.

The team kept narrowing the pool until they found a few dozen genes that they thought were involved in the evolution of particular human traits.

They found one of sections of DNA deleted in the human genome was responsible for producing sensory whiskers, such as those in mice, and prickly spines, like those found on the penises of many mammals.

“People are always surprised to hear that the penis of many organisms are covered with these spines,” Kingsley said in a telephone interview.

He said penile spines, or barbs, are typically present in species that mate quickly, such as male chimpanzees who must compete to fertilize one or two receptive females.

These spines — made from keratin, the protein found in fingernails — often lie over sensory receptors, and some experiments suggest removing them makes copulation last longer.

For humans, losing these penile spines might have prolonged intercourse and helped make monogamous relationships a more attractive option, the team said.

Even more interesting to Kingsley, however, is that another of the DNA deletions was located near a gene that kept brain cell growth in check. The deletion of this DNA may have contributed to the development of larger brains in humans, he said.

Both of these traits may be related to meeting the reproductive needs of humans, which give birth to babies with large brains, requiring parents to mate in pairs — at least long enough to care for their big-headed offspring.

“Pair bonding is good if you are trying to raise relatively helpless infants,” Kingsley said.

More than just explaining physical differences in human evolution, however, the team hopes eventually to discover important physiological differences, including why humans are susceptible to diseases such as arthritis, cancer, malaria, HIV, Alzheimer’s and Parkinson’s.

Quick aside, name the number of viruses that have a cure.

If you said a number larger than zero, you’re wrong.

We can currently treat the symptoms, in some cases – like malaria – successfully. Mostly we just put our hands together and pray. Not that there’s anything wrong with prayer, but a little help is always appreciated.

So ladies, thank evolution for the smooth penis and, gentlemen, thank it for allowing you to make ladies happy.