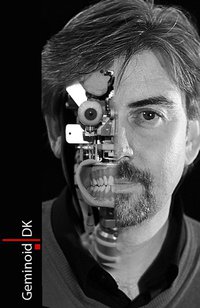 Okay, so I admit… I’m one of those nerds that watched Star Trek: The Next Generation growing up. Who am I kidding, I still watch the re-runs today:)!

One of my favorite characters on the series was the Android named, “Data.” He had human-like characteristics, but lacked the ability to feel emotion like humans. It’s unknown whether the Geminoid DK is that advanced just yet, but it could truly be mistaken for a person. Henrik Scharfe has successfully created his own ageless robot clone.

Institute International (ATR) to create Geminoid DK, a lifelike android copy of himself. According to their official site , Geminoids are basically remote-controlled slave robots powered by a quiet air servo system. They mimic the facial expressions, lip movements, and body motions of a human user through motion-tracking gear and an Internet link.  I think the fictional character, Data, would be pretty impressed with this creation.

If money weren’t an object, would you want your own robot clone? I think it’s amazing that technology has expanded to this level, but it’s a little too freaky for my taste.

Check out the video below of the Geminoid DK being tested out. It’s blinking like a real human being!! I thought it was really Scharfe the first time I saw it. Could a scenario like the movie series, The Terminator really occur someday? Let’s hope this isn’t the first step to having machines come back from the future someday looking for Sarah Conner!

Want to be friends with this first ever life-like robot clone on facebook? I definitely am 🙂 If you “like” Geminoid on facebook you can check out the creation process in pictures. It’s pretty amazing! Now, if they could only make robots that cook, clean, and do my laundry I wouldn’t care what they

looked like. I’m going to write Henrik Scharfe a note on facebook asking if he can start developing that robot. Just like Rosie, the maid robot on the Jetson’s please:).