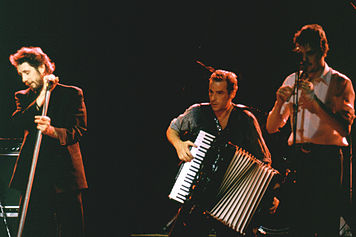 There’s no shortage of quality live music to see in this town by any stretch of the imagination.  Aside from special one-off events that seemingly pop up constantly, we should also be thankful that we’re on the shortlist of towns in North America that gets visited by virtually every tour.  If an artist is making a short swing with only a ½ dozen or so stops around the country, we know we’ll have a date scheduled here.

Such is the case with ‘A Parting Glass With The Pogues’…the 6-city, 10-date tour by The Pogues that gets underway tonight at The Congress Theatre.

Making it all the more urgent is that not only does the name of the tour allude to it, all signs are indeed pointing to the fact that this is it for Pogues tours as we know it.  Here’s band co-founder Spider Stacy talking recently to Billboard:

“I think we are basically pretty certain this is the last tour of this type we’ll be doing in the States.  There might be the odd sort of one-off here and there, or other things like that,” he explains. “We’re not saying this is absolutely, definitely the end. But as things stand at the moment, I don’t really see us continuing as we have been. It seems to have run its course. You can never say a door is absolutely, definitely and finally shut, but we’re drawing the line, to a certain extent, this time.”

I’m not even going to waste the space on your screen with a diatribe on how monumental it is to see The Pogues play live, nor on their indelible place in music (namely alternative music) history.  If you don’t know, then you’ve just been missing out.

However, if you decide to convert today and change your life…some last minute tickets do remain, and you can get them here.  They’re not exactly cheap, but then again it’s not exactly cost effective to get an 8-piece band across the ocean and on tour, either.

But simply being able to say that you witnessed the spectacle that is this band and the dubious physical/vocal state of iconic front man Shane MacGowan is priceless.

The show is brought to us by the folks at Riot Fest, who are also responsible for bringing us The Dead Milkmen to the Congress on April 30th.

I could fill a full page full of videos of Pogues songs that I love to death, but here’s a least a cross section between their Irish traditional-meets-punk bombardment and the twisted ballads both of which are fueled by the self-destructive/literary savant/train wreck MacGowan.