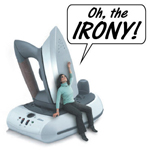 Whenever someone claims that God has no sense of humor, I immediately point them to the Duck-Billed Platypus or Gay Republicans Who Support African-American Klan Chapters. Right there are some theological knee slappers if you ask me. But you need not stick to the fringe or the esoteric. There are many fine examples of irony in our modern world. Alanis Morrisette writing a song called “Ironic” that didn’t feature one single instance of irony would be one example.

But, sometimes, even knowing all that, there are things that give you pause. For example, if Kiwani Illinois banned the local chapters of the Kiwani’s Club, that would be both ironic and sad. Well, believe it or not, according to MSNBC, Savannah Georgia has now set the bar so high (or low, as the case may be) that none may ever come close.

They banned Girl Scouts from selling Girl Scout Cookies by the home of the founder of the Girl Scouts.

Girl Scouts are no longer able to sell their famous cookies outside the historic Savannah home of the woman who founded the organization almost a century ago.

A complaint last year ended the longtime practice of selling the cookies on the public sidewalk outside the home of Juliette Gordon Low at the busy intersection of Bull Street and Oglethorpe Avenue. Peddling on a public sidewalk is a violation of city ordinance. One city alderman said he thinks the city should consider a temporary exception for cookie season.

The city’s zoning administrator, Randolph Scott, said he investigated the matter and tried to find a solution. He said he called for a survey, hoping there would be some private space between the home and the sidewalk. He said there wasn’t any.

Scott said they also looked at allowing the Scouts to sell from a small courtyard on the side of the house, but fire marshals told the Scouts they would block an exit route. The home is a National Historic Landmark open for tours.

“I know it doesn’t look good,” Scott told The Savannah Morning News. “However, other businesses won’t care if it’s the Girl Scouts or March of Dimes. They’re going to say, ‘Why can’t I sit out front and solicit business?'”

City Alderman Van Johnson said he thinks the city council should consider a variance to allow temporary sales during cookie season, which usually happens in the first few months of the year.

“Juliette Low brings thousands of tourists from around the country. Juliette Low is known for Girl Scouts, and Girl Scouts are known for cookies,” Johnson said. “Let’s be reasonable. Let them sell their cookies.”

Scouts have since started selling near some other high-traffic intersections. Girls used to be able to sell about 250 boxes in three hours outside the Low home, said Jan McKinney, who heads product sales for the Girl Scouts of Historic Georgia.

But she says it’s important that the girls learn the larger lesson of the change. She says the cookie sales are intended to teach the girls money management, public speaking, customer service and business ethics.

“We try to teach them that in business you have to adjust to things that happen, adapt to the market and follow the law,” she said. “It’s a real-world experience.”

The executive director of the Low house, Fran Harold, said tourists loved buying cookies from the girls at the home.

“It’s kind of sad for the girls, too,” she said. “There’s nothing cuter than some little Brownie Girl Scout selling cookies on the sidewalk in front of the Juliette Low house.”

Low founded the Girl Scouts in Savannah in March 1912 after meeting Sir Robert Baden-Powell, the founder of the Boy Scouts and the Girl Guides, and helped expand the organization worldwide.

Yes, the girls in Georgia will learn and grow and probably take over the world just as the giant, mutant, cockroaches invade from Florida.

Then again, they may be our best chance at survival. After all, it’s been proved time and again that they’re capable of learning and adapting, unlike the fools who currently govern them.