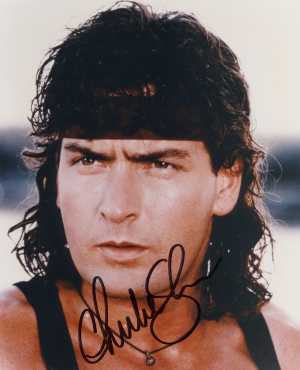 I was shocked after seeing Charlie Sheen’s latest interview on ABC this week… not so much by the crazy things he said, but more by how he looked. He’s lost so much weight since this mess began. Late Tuesday night on March 1st, Sheen’s  future ex-wife Brooke Mueller got a restraining order against him requiring Charlie to stay 100 yards away from her and have no contact with her, to which he responded, “Great. I was already planning on staying 100 parsecs away from her.”

Is it just me, or is Charlie using an extremely odd vocabulary these days? I honestly had no idea the true definition of a “parsec”, so I looked it up…….. at least he’s basically using these odd choice of words, correctly! His previous English teachers’ would be proud.

[pahr-sek] –noun Astronomy. Unit of distance equal to that required to cause a heliocentric parallax of one second of an arc, equivalent to 206,265 times the distance from the earth to the sun, or 3.26 light-years.

OH!! Charlie joined the Twitterverse, and already has over 900,000 followers. Yes, I’m one of those

As funny as this whole story is… it’s pretty sad at the same time.  His show, Two and a Half Men, has been canceled for this upcoming season, which is a direct result of his actions. Stopping the show is costing an estimated quarter of a billion dollars with everyone involved!

Dr. Jeff Gardere on CNN says that Sheen, “not only has a substance abuse issue, but he is also in the middle of a nervous break down, he’s in an acute manic phase.” Gardere went on to say that Sheen could end up in either  rehab again, or in a psychiatric hospital. Going on claiming that Sheen is, “very delusional and very very unbalanced mentally right now.”

Lately, Charlie has been known to say some pretty strange things like, “Warner Brothers Studios are changing their

name to: Charlie Brothers Studio.” The list goes on with off-the-wall quotes from Sheen these days, and CollegeHumor.com has taken it to another level by comparing Charlie Sheen’s random quotes to Ron Burgandy’s from the movie Anchorman.  Check out the link and see if you can guess “who said it??!” Charlie or Ron??