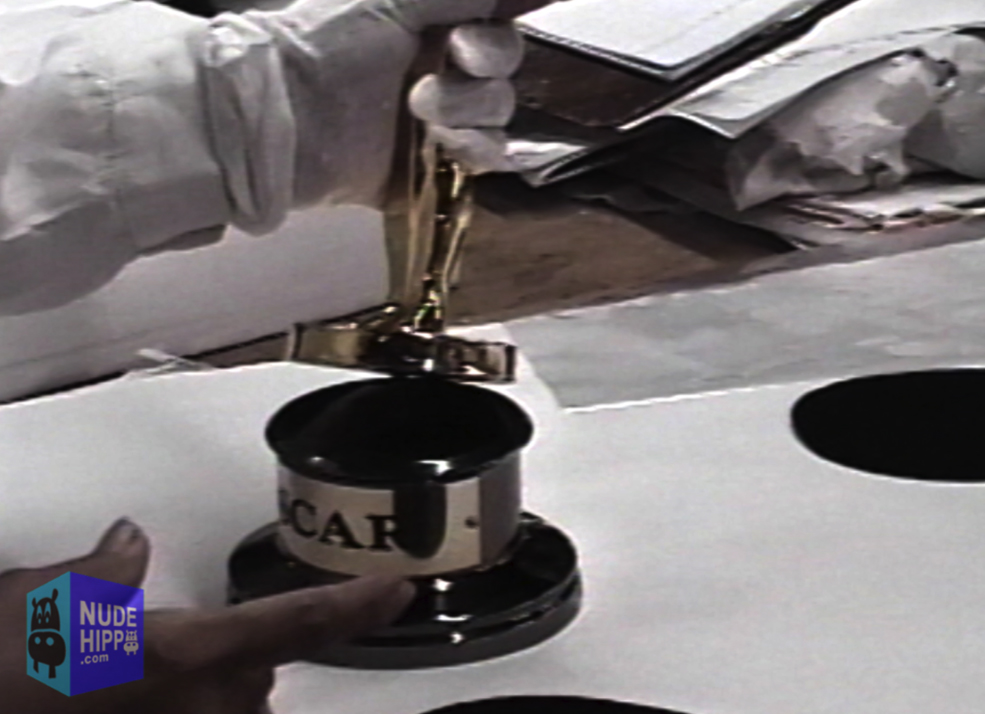 Oscar night is a big night for lots of those Hollywood movie stars, but without a particular Chicago connection, it would be missing some of the glitz.  In particular, those shiny statuettes that they are all hoping to get their hands onto.  Before you were even born, (assuming that your under the age of 30), the Academy of Motion Picture Arts and Sciences has been passing out Oscars statues from Chicago.

In 1982, R.S. Owens & Company, which made bowling trophies, got the gig to make those famous 13½ inches tall and 8½ pounds golden statuettes.   They also awards for Emmy, the MTV Video Music Award, the Academy of Country Music Award, the Rock and Roll Hall of Fame Award, and many others.

In 1998, NUDE HIPPO got a grand production tour of the R.S. Owens plant, by the man who started it all, Owens Siegel.  As the owner & founder, he began his company in 1938.  It was a great honor for our program to go inside and see an Oscar made from start to finish.  After the segment aired during Oscar week, a copy of his appearance on NUDE HIPPO and a thank you letter was sent out by Jim Gronemann, one of the producers back then.  To all of our surprise, Owen sent us a thank you letter for OUR thank you letter and expressed his delight in our coverage.

Years later, The Museum of Science & Industries opened an exhibit showcasing how R.S. Owens cast, molded, polished and buffed the Oscars for the 2004 award show.  NUDE HIPPO covered this event and included some of the footage that was used from the original Oscar piece.

Owen Siegel passed away at 81 in 2001.  His son Scott Siegel is now in-charge of the family business and the tradition still continues.  Our original coverage of Owen’s tour was damaged.  If our tapes were made as well as the statues that he made, there is no doubt that you would be watching his tour right now…so from my memory from that tour, I can tell you, that not only every worker did a fantastic job, but Owen was very proud of the work that was being done there.  Even his bowling trophies were made to last forever.  I just wish I could say the same for our footage.