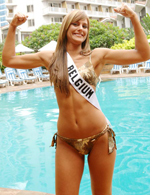 Yesterday, my little radio interview got pushed back a few minutes so that JoAnn and Ryan could interview Angie Harmon about her crusade to get kids to eat their veggies. And while all that was cool, and worthy, I really wanted them to ask her about the time she boinked a cartoon Batman. Specifically, in the movie Batman Beyond: Return of the Joker she, in the character of Barbara Gordon (a/k/a Batgirl), has a long conversation with the new Batman, Terry McGinnis, and it becomes apparent that she and Bruce Wayne had been knocking bat-boots back in the day. However, JoAnn and Ryan felt that the welfare of children came before my childish fantasies, so the questions went unasked.

Anyway, moving forward to the pseudo-point here today, let’s take a look at a Florida mom (why is it always Florida?) who went above and beyond the call of duty to make her child proud.

This kind of show-and-tell isn’t allowed in schools.

Police in Florida arrested a mother who allegedly exposed her breasts inside her child’s school during an argument with another woman who she believed was showing too much cleavage.

Law enforcement officials in Manatee County say Laura Campanello was visiting Bayshore High School at around 11:20 a.m. Monday when she noticed something amiss. And that something was another mother’s chest, according to the Bradenton Herald.

After the mothers started arguing, a deputy arrived on the scene and Campanello reportedly begged him to impose a dress code on the other mom.

But according to a police report obtained by The Smoking Gun, the deputy informed the 42-year-old suspect that he “cannot tell her what to wear as long as she is not exposing herself.”

That’s when Campanello allegedly pulled down her blouse and stated, “Oh, then I can.”

According to the Herald-Tribune, the suspect then squeezed her breasts together, adding, “And then I can just do this.”

Suspicion? What does it take down there to actually get cited for real disorderly conduct?

In Brazil, the citizens were so fed up with the status quo that they elected an illiterate clown to Congress. And when you have high quality representation like that, is it any surprise that the boob voted for the wrong party?

A clown who won a seat in Brazil’s Congress by a landslide has stayed true to his former profession by accidentally messing up his first vote.

Francisco Everardo Oliveira Silva, better known by his clown name Tiririca, had pledged to back the government’s austerity proposal for a new national minimum wage in a crucial vote on Wednesday night.

When the time came, however, Tiririca pressed the wrong button on the computerized system and accidentally voted for an opposition proposal for a much bigger increase in the wage than the government wants, according to Brazilian media who spoke to his office.

The leader of the opposition PSDB party in Congress’ lower house, Duarte Nogueira, said he was grateful for the unexpected support, although the government still won the vote.

“I went and thanked him — after all, it’s the support of the deputy who won the most votes in Brazil,” he was quoted as saying by the Agencia Estado news agency.

Tiririca caught the attention of disillusioned voters last October with a campaign slogan “It can’t get any worse” and a promise to do nothing more in Congress than report back on how politicians spend their time.

As long as we’re talking about politics, let’s head over to Belgium where a revolt is taking place. However, unlike the terror sweeping the Mideast, this revolution involves naked people, beards, fries and beer.

Dana Kennedy at AOL News has the whole story.

In sharp contrast to the life-and-death revolutions sweeping the Middle East, there’s a country in Europe about to surpass Iraq for the number of days it’s been without a real government.

Welcome to Belgium, where citizens on Friday will mark 250 days of Belgian-style anarchy with protests that will include stripping naked in the Flemish city of Ghent. French fries will be handed out in Leuven. It’s all part of the so-called “Fries Revolution.”

Beer will also be provided to protesters in several Belgian cities.

Beard-growing and calls to abstain from sex are a few more of the “revolutionary” tools being used to shame the country’s long-warring factions into coming up with a working government. The movement even has the ultimate accessory, a Facebook page, The Wall Street Journal noted.

Thanks to Belgium’s version of the Sunnis and Shiites — the wealthy, conservative Dutch-speaking Flemish of the north and the socialist, French-speaking Walloons of the south — last June’s elections ended in a political deadlock. At stake is Belgian’s unity: The Flemish want to form an independent Flemish state, and the French-speaking Belgians want the country to remain as it has been since 1830.

Belgium has a multiparty system that requires parties to work with one another to form coalition governments. But the Flemish and the French speakers to the south are so far apart that they haven’t been able to work out a political solution.

“We’ve had enough of political games,” said Kliment Kostadinov, one of the organizers, the BBC reported. “We must get a government fast and a reform of our institutions that is good for all Belgians.”

Johan Vande Lanotte, who resigned recently as King Albert II’s mediator tasked with ending the stalemate, urged Belgium’s political leaders not to give up, the BBC said.

“If the gap is so great, the parties should take great steps. That is not easy. Often they don’t realize how hard that is. You don’t make major reform of the state without enormous pain in your own ranks,” Lanotte said.

But Belgians have tried to not take the crisis too seriously.

Cedric Caudelier spearheaded a “protest” movement in January called “Beards for Belgium” (BeardforBelgium.be) in which he called on people not to shave until a government is in place.

Caudelier told Radio Free Europe that the beard-growing movement is “to say that we are still waiting for a government, we are living in Belgium, we are Belgians and we would like you to find a solution.”

They may be the most polite revolutionaries I’ve ever seen. But, I guess nothing says “we’re fed up and not going to take it any more” better than naked people with beards. Obviously, no one’s surprised that beer is involved.

And, bonus, what could be more appropriate than the fact they do want fries with that?