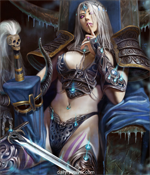 Don’t get me wrong, I’m well aware of how gangs have evolved since those days. Drive by shootings and neighborhoods surrounded by crack-houses and living in terror are not fun to think about. Even worse to live in.

But I feel safe in saying that even the most sheltered among you could tell the difference between a harmless social group and a gang. For example, while they dress alike and have odd rituals, no sane person thinks The Masons are a gang. Well, except for a few demented souls. Thus my previous caveat.

So it comes as a mild surprise that a jail in Wisconsin has banned inmates from playing Dungeons and Dragons. This is a game that’s been around much longer than any MMORPG and has never turned anyone into a serial killer or anything like that. I played when I was a kid and never developed the desire to organize my merry band of D&Ders into a para-military group bent on wanton destruction. Oh, I’ll admit we all wanted to find women who dressed like the scalding hot chicks on the covers of the various D&D Magazines, but that was about as daring as we got.

Nevertheless, as reported in All Weird News, the Waupun Correctional Institution’s ban on the game has been upheld by the U.S. Appellate Court.

Based on their ruling, I think you just need to collect enough box tops to become a federal judge. Clearly schooling isn’t involved.

Nerds behind prison bars take a big hit. No more fantasy lives for them when a U.S. court of appeal has upheld a ruling that bans Dungeons and Dragons, a popular role-playing game, from a Wisconsin prison.

Kevin Singer, an inmate in a Wisconsin’s Waupun Correctional Institution, had been a fan of the fantasy game since childhood.

Since he was incarcerated in 2002, he had amassed a significant collection of books and paraphernalia centred around the game. But in 2004, an anonymous note alerted prison officials to the sub-culture that can form between avid players.

“The letter expressed concern that Singer and three other inmates were forming a D&D gang and were trying to recruit others to join by passing around their D&D publications and touting the ‘rush’ they got from playing the game,” the ruling reads.

Shortly thereafter, prison officials raided his cell and confiscated everything related to the game they could find, including 21 books, 14 magazines and a 96-page handwritten manuscript that Singer produced himself.

All inmates were henceforth “prohibited … from engaging in all types of fantasy games.” When Singer protested by filing a complaint through the prison complaint system, it was dismissed.

But Singer persisted, filing a civil rights complaint in federal court, alleging his rights to free speech and due process had been violated.

While Singer produced evidence from D&D experts as well as several inmates arguing that no gang activity was taking place, nor had D&D ever led to gang activity in the past, prison officials countered with arguments that co-operative games can mimic the organizational structure of gangs, and prison security is paramount.

As such, the ban was upheld in a Jan. 25 ruling. Other games — including Risk, Stratego, Chess and Checkers — remain on the prison’s allowed list of games.

Singer is serving a life sentence for stabbing his sister’s boyfriend. Being in prison sucks and now for these guys I guess it will suck a bit more. They will have to spend their time bulking up in the gym.

Let’s look at the remaining games, shall we?

RISK is a game that teaches you basic military tactics for taking over the world.

STRATEGO is a battlefield game that encourages deception and military dominance.

CHESS is a strategy game that encourages the violent overthrow of an opponent’s hereditary rulers.

CHECKERS is a game that rewards the destruction of the peasant class and encourages the creation of kings to secure power.

What do you do in Dungeons and Dragons? You go on a quest, find cool stuff and go home until your next quest. Maybe you slay a dragon.

Yeah. There’s a threat to humanity. D&D is so popular, and benign, that it’s become a regular part of the Timothy McGee character on NCIS. They don’t call him Elf Lord because he lost a bet. He’s a fan of the game and unapologetic about it.

Given the fact that the game requires many hours to play and for the gamers to be seated politely at a table, you’d think that prisons would encourage it.

Let’s face it, this isn’t a game that’s going to have Crazy Bikers or The Bloods quaking in their boots.

They’d be more likely to be afraid of some dude wearing torn Spandex and makeup.