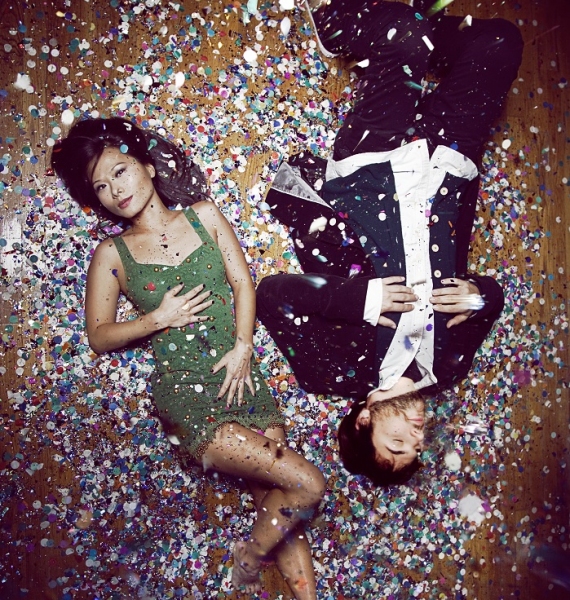 Are your ears feeling frisky?  Here’s just a couple of examples of new music out this week worth checking out:

New York indie duo Asobi Seksu returns with their 4th full-length release (5th, if you throw in a 2009 collection of acoustic versions of songs already in their repertoire).  The driving force of the group is the duo of Yuki Chikudate (vocals/keyboards) and James Hanna (guitars), who have built up a reputation of creating a sonic rush of layered guitar swells with Yuki’s voice tucked away nicely into the mix.

They have, though, moved further and further away from that formula with each subsequent release, and ‘Fluorescence’ features much cleaner melodies and arrangements with vocals brought more to the forefront.

Purists of the band might scratch their head over the changes, but there are some catchy gems on this record:

The album is out on Champaign, IL’s own Polyvinyl Records and Asobi Seksu brings the new tunes to town for a February 28th gig at The Empty Bottle.  Tickets are $12, and you can nab them here.

MOGWAI – ‘Hardcore Will Never Die, But You Will’

Glasgow’s Mogwai set out in the mid-90s to create “serious guitar music”, and they succeeded.  Call it ‘space rock’ or ‘post rock’ or whatever you wish, these guys are a triple guitar threat (quadruple, if you count the bass) and the songs are dynamic soundscapes of mostly instrumental and mostly lengthy tracks.

But you don’t have to be a music or guitar nerd to enjoy this band.  It’s true that their material is probably best enjoyed with a pair of good headphones over your ears, it’s terrific soundtrack music to just about

anything that you might be doing, and I don’t mean to say that it’s simply background music.

This track is a rare one for Mogwai in that it features vocals and is under 5 minutes in length.  The title seems to be politically inspired as George Square is the main civic square lined with government buildings in their home of Glasgow and well, we all know who Thatcher is.

‘Hardcore Will Never Die, But You Will’ is Mogwai’s 7th record, and came out this week on Sub Pop.  Metro hosts Mogwai for what should be a bombastic show on April 29th.  Tickets are $25 and I can’t imagine them sticking around very long, so hop on over here to get yours.