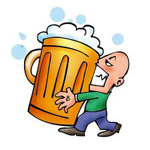 When the Bible talks about Jesus drinking wine, it conveniently leaves out that it’s not talking about some wimpy Chablis or pinot noir. 2,000 years ago wine was just fermented fruit and not processed. If you try to make it at home you’ll come up with a drink that’s closer to grain alcohol than anything you’ll get on shelves today. Not that I’m claiming Jesus was a drunkard, far from it, I’m just pointing out that there was strong drink available back then and, at least at the wedding at Cana, people weren’t afraid to pour it. Ancient Egypt had those huge granaries. After making all the breads and cakes you could possibly eat, you needed something with which to wash them down. As they quickly discovered, excess grains make great booze. Mostly beers, but they had a nice variety going after a while.

Great wonders of science have come from men and beer. In 1796 Dr. Edward Jenner discovered a cure for smallpox. Was this done in a lab? Of course not. He figured it out by kicking back and watching milk maids.

“No, really honey, it’s science. Grab me another beer on your way back to the laundry, will you?”

That wonderfully healthy pasteurized milk you drink? Happy accident. Louis Pasteur was looking for a way to keep beer from spoiling. I can imagine no nobler quest.

I could go on, but you get the idea. Thanks to men and beer civilization has flourished and gotten healthier. Oh sure, the more picayune among you may point out that the Third Reich got started in a bar, but I feel safe in pointing out that history shows that was an aberration and not the norm.

Now, Ben Muessig of AOL News reports that the greatest idea in the history of history is headed to a bar near you.

California entrepreneur Sam Sparks has created a sport dubbed “Knokkers” — but he insists it’s not a whole new ballgame.

For the most part, Knokkers is just like billiards, only bigger. Much bigger.

Players don’t hit the cue ball with a stick. They use their hands. And they don’t eye their next shot while walking around the table. They pick their angles while walking on it.

It’s a merger between pool and bowling, and in a single word, it’s massive.

The game is played on a 15-foot by 30-foot table with bowling ball-sized projectiles. Unlike pool, players don’t “scratch” if they move the cue ball before taking a shot.

“The rule in the game of Knokkers is that once you touch the cue ball you have to keep at least one of your feet stationary — like a pivot foot in basketball,” he said. “You can stretch and totally change the geometry of your shot. It makes for fewer difficult shots.”

That leads to an easier, faster game that Sparks believes will appeal to both children and adults.

Plans for large-scale billiard games aren’t exactly new — in fact, one inventor in the 1970s even patented a game that would mix pool, bowling and disco aesthetics by allowing players to walk on the table but forcing them to wear tall platform shoes “for safety purposes.”

According to Knokkers lore, this massive pool iteration is the brainchild of Steve Wienecke, Sparks’ cousin, who says he dreamed up a big pool game in the 1980s. He didn’t get around to building a table until three years ago when he finally managed to lay a concrete slab in his Missouri backyard. Since then the game has taken off.

“We had a party, and we couldn’t get the kids off of it — so I thought, ‘Let’s commercialize this thing — let’s build this for real,’ ” Sparks told AOL News.

Sparks and his cousin began building table prototypes from construction materials, such as railroad ties, indoor/outdoor carpet and recycled tires, and painting bowling balls so they looked like billiards balls.

Through trial and error they say they eventually came out with a table that has the same responsiveness as a standard pool table.

“It has the exact action as a pool table — you can make a three- or a four-rail shot.”

They also realized that normal bowling balls can’t withstand the wear and tear of the game, so Sparks used his background in the plastics industry to design 6-pound Knokkers balls from polyurethane.

Standing on a table and dodging those ricocheting balls isn’t as dangerous as it sounds, according to Sparks.

“We haven’t had anybody hit with a ball,” he said. “Because the balls are only 6 pounds, if you were to be hit with one it would be more of a nuisance. It might hurt, but it wouldn’t injure you.”

Sparks is ready to manufacture tables for interested buyers, and in the next few weeks, he hopes to open the first public Knokkers court at a bowling center in Southern California.

In the next 10 years, Sparks hopes to construct 1,000 tables worldwide. His business is starting out offering two kinds of tables — permanent fixtures intended for bowling alleys, sports bars and the backyards of the most dedicated players (starting at $39,000), and portable tables that can be quickly installed at fairs, festivals and sporting events.

By showing off Knokkers in public places, he hopes the game will win fans.

“It has a real captivating presence. It pulls people in, kind of like moths to light.”

Though he says the game is popular with his kids as well as his mother, Sparks plans to market the game to a demographic between the ages of 21 and 35 — particularly bar and bowling alley patrons.

That’s not very surprising considering the not-so-subtle double entendre in the game’s name and logo.

In fact, Knokkers can serve as an icebreaker for singles looking to hook up at bars and bowling alleys, according to Sparks.

“A girl can say, ‘Hey, look at my Knokkers!’ and get away with it,” he explained.

Beyond the risque jokes, Sparks sees Knokkers as liberating.

“When you’re standing on the felt, it’s kind of taboo. You feel like you’re getting away with something when you’re playing a game.”

“Hey, look at my Knokkers!” is the kind of command that can make a grown man weep with joy.

If you want to see just how much fun it can be for consenting adults to play with their Knokkers, just watch the video.