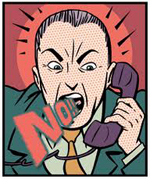 We’re all accustomed to having our personal space invaded by spammers and telemarketers and wonderful offers of multi-million dollar inheritances and tantalizing chances at improving our love lives and so on. When we seem unmoved by these chances at self improvement and riches, it seems they up the ante by putting pop up ads and banners in front of our favorite web sites. If that’s not enough there is clothing sold with advertising included and called “brands.” That way you can pay for the privilege of advertising their wares to your unsuspecting friends. It’s gotten so pernicious than television shows run ads at the bottom of the screen during your favorite TV shows.

Heck, you can’t even watch a video on You Tube without being forced to sit through some lame auto ad.

In other words, I think we can all sympathize with this British mom.

Athima Chansanchai at MSNBC reports that mom hung up on a legitimate $10,000 prize.

Conditioned to politely hang up on telemarketers, Gail Davis followed form recently, only to find out she had hung up on a legit Apple giveaway of a $10,000 iTunes gift card for downloading Apple’s App Store’s 10 billionth app early Saturday morning, a milestone our own Suzanne Choney wrote about over the weekend.

“I thought it was a prank call,” the UK-based Davis told CultofMac.com (Thanks Gizmodo for pointing us there.) She remembers saying, “Thank you very much, I’m not interested” and then she hung up. (She doesn’t even own an iPod that can run apps, but her daughters own iPod touches.)

Luckily for this mom, her two teenage daughters came scrambling downstairs to tell her that this was no prank and that she better call back! They had apps to buy, for god’s sake! (That last comment is from my own reenactment in my mind of this pivotal family moment.)

Turns out the girls had downloaded a few apps that morning, including the free Paper Glider app, in which the object of the app is to see “how far can you flick and fly your paper aeroplane.” It’s one of the top five free App Store apps, even with user reviews titled, “Truly crap,” “Boring” and “Lame.” It now has the distinction of being the App Store’s 10 billionth app. And the lucky person who happened to download that milestone was going to get a reward: a $10,000 iTunes gift card.

“The girls came down and said it wasn’t a prank,” Davis told CultofMac.com. “I had a moment of panic.”

That panic led to a frantic return call to Apple, but that led nowhere fast, except to generate more family drama.

“The more I thought about it, the more I realized it was a genuine call,” she recalled. “The girls were getting quite tense. They never would have forgiven me. They would have held it against me for all eternity.”

But this reality show moment ends happily. An Apple exec called back and sorted things out, making sure Davis received the award.

Now may be the time for Davis and her husband to upgrade their iPods so their daughters aren’t the only ones enjoying all those new apps and/or songs, movies, tv shows, etc. And from now on, she may want to screen calls first before hanging up so abruptly!

So, all’s well that end’s well. Mom can now afford to let her darling daughters download even more apps for a product that is basically 90% hype and 10% phone.

In other words, it’s proof that someone is buying into those pop ups, banner ads, spam ……

Thanks to Gina Ferraro for finding this video