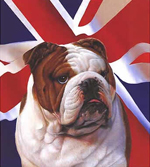 I’ll give you an example.

You, because you’re wonderful and intelligent, live in Chicago. You have never, not once, not ever, used the word “fagged” in a sentence. I don’t care if you’re gayer than Tinkerbell’s tailor, you’ve never done it.

“Tut tut, Lovie. That walk down the hall to get a bucket of ice has left me a touch fagged. I think I’ll have me a bit of a lie down.”

Nope. You’ve never done it. And after reading that, even the most left wing, tree hugging, pacifist now understands the meaning of justifiable homicide. We just don’t talk like that.

And for good reason.

That whole 1776 thing had nothing to do with freedom or taxes or the right to pray to the Flying Spaghetti Monster. Simply put, Americans couldn’t take any more of that nasally arrogance and warm beer. Plus, thanks to Betsy Ross (who foresaw the coming of Eddie Izzard), we had a flag.

Add in the facts that we don’t have a king or queen (well – we have plenty of queens – you can see them on MTV-Logo) and that we fought many wars to retain our form of democracy, and you can see why we’ll just never blend well with the English.

It’s that wacky democracy thing that I’m going to focus on today.

What? No, really, there is an actual point to this mess.

In the U.K. town of Suffolk, they decided to find their most iconic resident. To do so they did a very non-British thing; they put the idea out to the public for a vote. The residents, unaccustomed to being asked what they thought, did the only thing they could do; they voted for the town’s most iconic resident.

And that resident won by a landslide.

Then the town counsel tallied up the votes and said “Sorry ol’ chaps, but you must be kidding. Your vote no longer has meaning and we’re going back to the way we’ve always done things. By decree. Thanks for taking the time and all that, but, quite honestly, you scare the hell out of us and that’s why you’re never asked for an opinion.”

You see the local residents had voted for Dani Filth, lead singer of Cradle of Filth. As The Guardian U.K. reports, that was a non starter to the blokes who elected themselves leaders of their community.

And it seems tourism bosses would agree with you as they have dumped the lead singer of black metal band Cradle Of Filth from a drive to identify the county’s most iconic images, despite the fact he romped away with an online poll.

Tim Passmore, boss of Choose Suffolk, said: ‘While some of the images on the site may have gained a larger proportion of visitors’ votes, the panel felt their list of finalists displays the required credentials to act as representative iconic images of Suffolk.’

Instead, the 20 finalists only include wholesome images such as views of beach huts, St Edmundsbury Cathedral, the Sutton Hoo burial ship site, racing at Newmarket and Bobby Robson.

Cradle Of Filth has released several albums including Cruelty And The Beast and Nymphetamine.

Filth told a music website: ‘I guess this is where my heart lies. So in that respect, it’s a compliment. Although, I prefer a pint of Adnams myself.’

In case you’re an idiot, which the Guardian automatically assumes, you had to be told twice that Cradle of Filth is a black metal band. Of course, to non-musicians, that reads like Cradle of Filth is a group of African heritage with guitars. They would be wrong, but that’s what happens when pompous journalism attempts to explain something about which it has no clue.

The funny thing, to actual musicians, is that Cradle of filth isn’t a black metal band. Not even close. They’re just a self indulgent metal band (that may be redundant) with an angry singer. You’d have an easier time passing The Spice Girls off as a boy band than getting black metal fans to buy a Cradle of Filth record.

But, never ones to let facts get in the way, the British march merrily on. Which is a shame. I, for one, would have stopped in Suffolk if they had a nice local cheese named after the band.