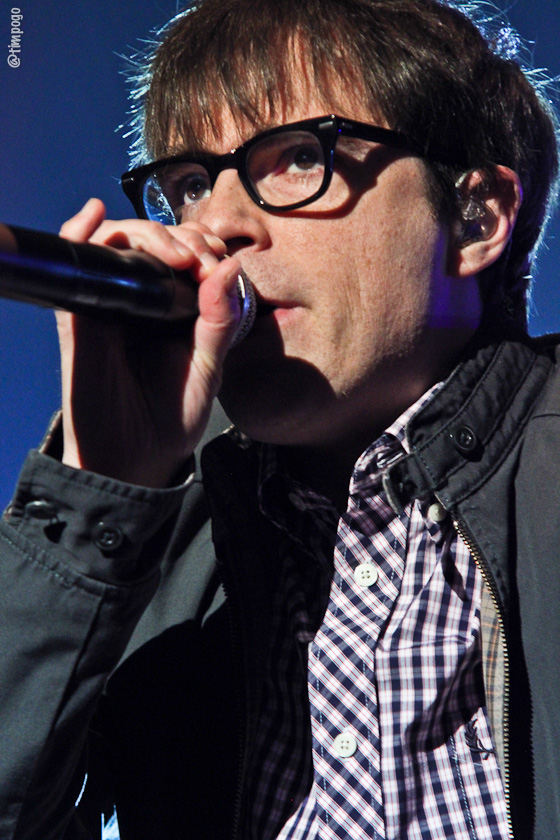 Much to the delight of hordes of rabid fans, Weezer–the grandfathers of “math rock” or “geek rock”–brought down the Aragon for two sold-out shows over the weekend.

These weren’t ordinary shows, either…despite the fact that they do indeed have a new album to promote.  Neglecting the traditional “here’s another one off our new record..which you can buy in the back” approach, Night 1 featured a front-to-back performance of the seminal 1994 debut self-titled album (‘The Blue Album’), while 1996’s critic-favorite ‘Pinkerton’ was the focus of Night 2.  I was present and shooting photos on Night 2.

Whether you like Weezer or not, these two records are landmarks in alternative rock history and perhaps most interesting was the disparity amongst the members of the crowd.  The older fans who were around when those first two albums from the band were released (umm…like me) were present in force, while teenagers made use of the all-ages tag on this show representing faithful that have caught onto the group during their past decade of success.

Frontman Rivers Cuomo might define the nerdy musician profile, but make no mistake:  the man is a rock star.  He owns the room, never stands in one spot for more than one half second, and covered every bit of surface area of the rather wide Aragon stage.  By the third song (“The Greatest Man That Ever Lived” off of the self-titled 2008 record known as ‘The Red Album’) Cuomo had hopped right down into the photo pit to balance on the crowd barrier and get right on top of the front row.

Having seen a couple of these “full classic albums played from start to finish” shows (such as the Pixies ‘Doolittle’ tour in 2009), I’m a fan of the fact that these bands tend to warm things up before diving into track 1 of said album.  Weezer cranked out 10 songs, in reverse chronological order, bringing the building into a fever pitch before an intermission which led into the ‘Pinkerton’ portion of the night.  The first set began with “Memories” from the recent ‘Hurley’ release, then back through ‘The Red Album’ (“Pork and Beans”), 2005’s ‘Make Believe’ (“Perfect Situation”), 2002’s ‘Maladroit’ (“Dope Nose”), 2001’s ‘The Green Album’ (“Hash Pipe”), ‘The Blue Album’ (“Only In Dreams”) and a few b-sides (“You Gave Your Love To Me Softly”, “Jamie” and “Susanne”).

Nobody can deny that this band has honed their live performance in nearly two decades of existence, and they play with as much energy (if not more) as the crowd, making the job of photographing them an easy one.  Enjoy.