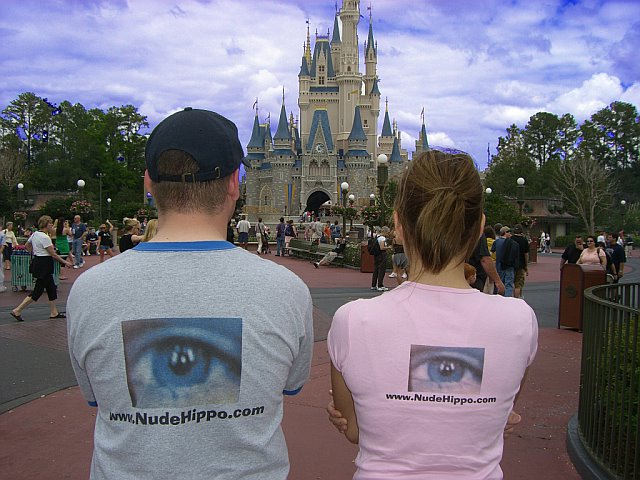 Back in 2007, NUDE HIPPO: YOUR CHICAGO SHOW was winding down an amazing run on cable after a decade.  So when asked what were they going to do now, the response was simple; “We’re going to Disney World!”

Tony Lossano, Amy Zanglin & Damaris Woodbury packed their bags and met up with the Florida NUDE HIPPO production team to tape three weeks worth of episodes at the four main parks at Walt Disney World, while staying and showcasing three of the Disney Resorts.  The team did reports from Epcot, Animal Kingdom, Disney’s Hollywood Studios and the Magic Kingdom.  On camera, they rode on Rock ‘n’ Roller Coaster, Tower of Terror & a half dozen other rides.  They saw shows, spoke with the cast of Cirque du Soleil La Nouba and even got to hang out with Mickey Mouse himself!

It took a lot of time and work to coordinate such an adventure.  A story was told on how this almost didn’t happened when an executive in the Walt Disney Company liked the show but had concerns about the name “NUDE HIPPO” – at which point it was brought up that Disney had a duck running around who didn’t ever wear any pants.  The executive agreed and gave his approval for the production.  Thank you Donald!

While taping at Disney, everything was carefully handled, ensuring that the NUDE HIPPO team was able to do their style of coverage without jeopardizing the standards of Disney.  Everything went without an incident.

Even the big scheduled taping with Mickey went well.  To work with THE Mouse, bits we’re approved ahead of time.  Before Mickey came out, it was explained that he has a very tight schedule and he had to be done at a certain time.  It didn’t matter if we we’re in the middle of anything, he would have to leave.  That was clear, since he couldn’t be late for his next gig.  (Plus Mickey can only appear at one location at a time.)  NUDE HIPPO had a half-hour with Mickey.

They did bits, which included a workout out in the park with the mouse, a game of paddy-cake, picture taking (Mickey snapped photos of Tony, Amy & Damaris in front of the castle) and a promo telling the HIPPO viewers how they could win a trip to Disney, just by watching the three episodes.

When all was said an done, the producer thanked and told the Mickey’s rep that they were done with Mickey.   The rep responded by saying that most production crews do not finish in time and hardly ever before they had to be…and that he never laughed so hard during a shoot like this.  They were very pleased with NUDE HIPPO and the show got very good material as well.

You can still see more from these three shows on Disney’s official event website.  NUDE HIPPO also created a page on Facebook with videos and photos.  This page is still occasionally updated with more material.

Who knows, maybe NUDE HIPPO will go back one day and bring more of the magic back to Chicago.   Until then, keep dreaming…you may get what you wish for!