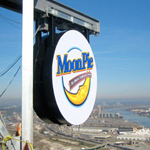 **sniff** This is the kind of article that makes me proud to be an American. Forget about skyscrapers and libraries and stuff like that. It’s when Americans build things like the World’s Largest Ball of Twine and immediately find that there’s a competing claim that makes this country great.

Where’s Johnnie Cochran when you need him?

You can also forget things like the Field Museum. Who needs stale recitations of arcana when you can visit Exotic World, the home of the Burlesque Hall of Fame? Why bother with silly things like the Art Institute when you can take the family to a true cultural awakening at The Museum of Bad Art?

It is in that spirit that we here at the World News Center for your Nude Hippo, present you with some alternatives to the boring NYC Glitter Ball drop hosted by a cyborg claiming to be Dick Clark. Our favorite source for listings of true Americana, David Moye, says that people will drop everything from mutant cherries to a pirate wench to kick off the new year.

The Times Square ball gets all the publicity, but it’s not the only thing being dropped on Dec. 31 — and we’re not talking bad habits.

Seems like almost every city — big and small — marks the new year by dropping something from a tall building or a crane.

For instance, the city of Memphis, Tenn., will honor its musical heritage and the beginning of 2011 by dropping a giant illuminated Les Paul guitar from scaffolding alongside the Hard Rock Cafe on Beale Street.

Meanwhile, Traverse City, Mich., the self-proclaimed cherry capital of the world, will drop a giant cherry for the second year in a row.

According to Dean Rose, one of the organizers of the “Cherry-T Ball Drop,” the official name of the event (because it’s a fundraiser for charity — get it?), says the fruity idea took root last year when one of his friends thought a cherry-themed New Year’s celebration would be fun and fitting.

It also helped that another friend had a crane.

Last year’s cherry was a giant rubber ball about 6 feet in length.

“It had some issues in the wind,” Rose told AOL News. “We’re on the Great Lakes, so we get weather here.”

This year, the cherry is bigger — around 10 to 15 feet in diameter — and made from aluminum and built so the wind can go through it.

Chatham, Mass., also has plans to hook people to its New Year’s celebration. Ever since 2007, the festivities have been highlighted by having a giant cod drop down to signal the new year.

Rich Clifford, who built the 9.5-foot fish out of aluminum crystal, says the colossal cod will descend 60 feet down to Oyster Pond Beach.

It took him six months to build the fish, which is internally lit — and, chances are, the folks watching it will be too.

Other cities with their own version of the Times Square ball:

**The city of Mobile, Ala., will celebrate the beginning of 2011 by dropping a giant MoonPie to the ground.

**Lebanon, Pa., will ring in the new year by dropping a 7-foot-long bologna from a tall building.

**Residents of Mobile, Ala., will witness the plunge of a lighted 12-foot, 600-pound MoonPie down the side of a 34-story building.

**Port Clinton, Ohio, residents will celebrate at midnight when a 20-foot, 600-pound fiberglass walleye fish drops from a tall crane.

**Eastport, Maine, and New Brunswick, Canada, will have an international flavor to their New Year’s parties. Eastport shares a bay with the Canadian province and during the annual New Year’s Eve celebration, a giant red maple leaf is lowered from the top floor window of a museum in downtown Eastport at 11 p.m. local time to ring in the Canadian New Year. Then at midnight an 8-foot-long, realistically painted wooden sardine drops from the window to ring in the American New Year.

**Key West, Fla., has two big droppings to ring in the new year; Schooner Wharf will drop a pirate wench into the ocean at 12 sharp, and a drag queen named Sushi will drop from one end of the town in the other in a pair of high-heeled shoes.

**Atlanta traditionally drops a giant 800-pound peach at midnight. This year is no exception, but to add to the festivities, Tito Jackson will be performing and his mother, Katherine Jackson, will be there to watch his show.

Sadly, not every city will be able to celebrate the end of 2010 by dropping a giant something from the sky. Nashville, Ga., planned to drop a 1,000-pound cotton ball, but a spokeswoman says the event was canceled because none of the downtown buildings can handle something that heavy.

A concert by the least talented Jackson and a drag queen named Sushi? You don’t get high quality entertainment like that on TV. You need to go out and experience this kind of stuff for yourself.

This year, as you prep for the evening’s festivities, I ask that you remember the advice of my good friend who happens to be a DUI Attorney;

Here’s my warning to start the holiday season. Be especially careful. If you are at a party, limit yourself to one drink per hour and don’t drive for two hours after your last drink. If you are going to party hard, get a limo, a taxi or a hotel room. It will be much less expensive and much more safe.

In other words, make sure you come back to us next year.

From all of us here at the World News Center to all of you, have a safe and Happy New Year.