Looking for a cheap cover this New Years Eve? Here’s your place!!! 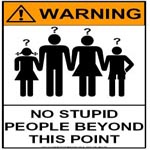 This year, Floridians learned that burials at sea don’t work if the body doesn’t sink, giant snail mucus can make you sick and that an underwire bra can stop a lawyer from visiting her client in prison. Florida lived up to its reputation for being an odd state in 2010, with residents committing stupid crimes, making poor decisions and exhibiting general weirdness. Proving, beyond a shadow of a doubt, that Disney World’s not the only place there that’s got freaky residents.