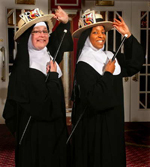 So there you are. Not here, but there. You and your buds, hanging in Atlantic City, having delightfully perused the glorious gifts of God’s creations that were kind enough to be bikini clad on the Boardwalk. Maybe you even wasted a few minutes wandering through the, wonderfully cheesy, Miss America Museum. Who knows, you may have even taken some time to ride the rides at the Steel Pier or eaten one of the sublime creations at Create-A-Cone.

Now it’s time to kick back, grab a frosty cold adult libation and commence to do a little gambling.

Of course, you and your buds are worldly wise. You’ve seen and done many things in your years. Not much can surprise you. But, yet, the sight of a nun doubling down on a pair of 8’s at the blackjack table still gives you pause. Had you known that said nun had gotten her stake by ripping off unsuspecting students of Iona College you might have actually been stunned.

Nevertheless, Reuters is reporting that this exact turn of events is what lead police to arrest Sister Marie Thornton.

A Catholic nun with a reputation for gambling trips to Atlantic City was accused of embezzling more than $850,000 from a college where she oversaw the school’s finances, officials said on Friday.

The thefts occurred between 1999 and 2009, when Thornton resigned from the Catholic college, court documents said. She entered a plea of not guilty to a federal embezzlement charge.

The college of some 5,000 students has come under fire from alumni and donors for never reporting the missing money to authorities and only mentioning the theft in its 2009 tax filing sent in February to the Internal Revenue Service.

Iona officials issued a statement saying the school has implemented new financial oversight controls and recovered most of the missing funds.

The nun had a reputation for visiting casinos in Atlantic City, New Jersey, according to former Iona basketball coach Jeff Ruland.

The U.S. Attorney’s office originally said the theft was more than $1.2 million but on Friday revised the amount to more than $850,000, saying it had originally miscalculated.

Thornton’s lawyer Sam Talkin said: “We think the case will be resolved in a manner fair to all the parties involved.”

While I’m glad to hear that the school has recovered most of its money, I am a little curious as to what sort of invoices a nun can submit to run up a total like that. Holy wafers, normally $5.00, now a mere $10,000.00? Wimple repair, $5,000.00? Can you even begin to assess the costs of devotional beads on her ledger?

You’re in luck, I promise not to make any “habit” jokes.

I realize that Sister Marie is atypical for a nun and that many people prefer their nuns to be happy, singing, examples of purity as they laud the good works of a sainted man who was directly responsible for the massacre of the Gnostics and the Spanish Inquisition.