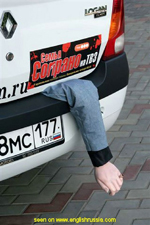 We’ve all had those days where nothing goes right. You’re in a hurry at the store and you grab some cheese on sale only to get home and see the label clearly states “Imitation Processed Cheese-Like Product.” The only thing missing is “Don’t accept any imitations.”

Or maybe you’re on your way to visit your Uncle Ernie and you get pulled over by some rookie cop with a big attitude, and a little hat, for driving 56mph in a 55mph zone. To add insult to injury he then makes you take the standard DUI test in the rain.

Maybe you’re just having one of those days where the newspaper lands in the gutter, the dog decides that it needs to evacuate its bowels on the carpet – RIGHT NOW DAMNIT! – just as the coffee pot turns into a volcano, your toaster decides that blackened bread is haute cuisine and your life partner announces that he/she is leaving you to pursue life in a monastic order dedicated to playing Bejewled online for free.

You’re having a bad day there, aren’t you Sunshine?

But just like your grandma pointed out when she was forcing you to eat your Brussels sprouts, there’s always someone worse off than you.

As reported by UPI.com, a Cambridge man was ticketed for parking while dead.

An English parking enforcement officer was “very disturbed” to find the driver dead inside a car after he had written a ticket, colleagues said.

Investigators say the driver, a man who appeared to be in his 50s, may have died from a heart attack Wednesday afternoon, The Sun reported. Cambridge police said the death was not considered suspicious.

The officer wrote a ticket when he saw the car had run out of time in a parking space in the center of Cambridge. Then he saw a man lying in the car and realized he was dead.

“I heard the call come in on the radio,” another enforcement officer told the newspaper. “He is really shaken up by it.”

His supervisor, Phillip Hammer, said the officer was “very disturbed” by the incident.

“We had seen the man but just thought he was having a kip,” said Bob Borges, who parked near the dead man’s car. “When we came back to our car the police were everywhere and they’d put up a tent around the car.”

Oh wait, it can get worse.

Since the ticket was written prior to the man being found dead, he could be banned from leaving England. Since Heaven is, last I checked, not a part of the United Kingdom, there is legal precedent to prevent him from being buried until the ticket is paid.

Not only that but his car could be impounded and his family assessed fines.

The only thing that could make this story complete would be if he was in Cambridge visiting his hooker girlfriend and their illegitimate children. My call to the Cambridge police department trying to find out this type of useful information was met with mild incredulity and then a request to “Fluff off.”

It’s a good thing I told them my name was Tony Lossano.