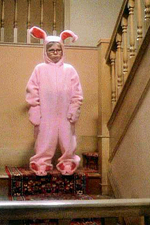 In many respects I’m just like normal people. I have the usual number of arms, legs and organs. More importantly, at least for me, they all work reasonably well. Nevertheless, there are some things that seem to keep me from the mainstream. I’ve never laughed at a Seinfeld joke, at least not the intentional ones, and you’d have to beat me with a claw hammer to get me to watch ice dancing. The allure of certain segments of pop culture eludes me as readily as the hot babe in the bar who suddenly professes her lesbianism to avoid speaking with me.

Just FYI, according to Ellen Degeneres I am personally responsible for the distribution of over 1,000 toaster ovens.

So it is with me and A Christmas Story. Don’t get me wrong, I liked the movie when I saw it. I thought it was cute and funny. I was glad I’d seen it but it didn’t exactly resonate with me at some deeply pseudo-religious level. As it turns out, this is yet another thing that culls me from the herd.

However, if you are among the many who worship this film, you’re in luck. You can now tour the house where the film was set, meet the cast and spend nutty money on stuff your friends will make fun of.

And, yes, you can ride in the firetruck. Can’t forget that.

Chris Epting from AOL News spreads the Gospel of Ralphie to an even larger audience.

It’s become one of the most beloved holiday exclamations, a gleeful cry of warmth and tenderness that evokes so many cups of hot chocolate around a cozy, stocking-draped fireplace: “You’ll shoot yer eye out!”

In 1983, the movie “A Christmas Story” roughly elbowed its way into our Christmas consciousness. A nostalgic tale of longing, sentimentality and the harsh realities of Midwestern life in the 1940s, the comedy, based on the work of author Jean Shepherd, has become a must-watch-TV marathon classic.

Old-time radio, Ovaltine, school bullies and the want of an “Official Red Ryder Carbine-Action Two-Hundred-Shot Range Model Air Rifle” are just some of the memorable touchstones of the film. But this holiday, you can do more than just watch it from your couch — you can live it.

This Friday and Saturday will mark the fifth annual “A Christmas Story” Celebration and Convention, which takes place right where the story was based, in Cleveland. The event is being run by the “Christmas Story” House and Museum — the actual home used in the film.

Opened over Thanksgiving weekend in 2006, the popular pop-culture landmark is a labor of love for Brian Jones, a devoted fan of the film who purchased the home in 2003 after it went up for auction on eBay. (At the time, he ran a business that sold re-creations of the infamous “Major Award” from the film — a scandalous, sexy, black-stockinged “leg lamp” won by Ralphie Parker’s dad.)

To date, more than 60,000 people have toured the house. Directly across the street from the house is the official “Christmas Story” House Museum, which features original props, costumes and memorabilia from the film, as well as hundreds of rare behind-the-scenes photos.

Among the props and costumes are the toys from the Higbee’s department store window, Randy’s snowsuit and toy zeppelin that he received Christmas morning, the chalkboard from Miss Shields’ classroom and the Parker family car.

Steve Siedlecki, the house and museum’s executive director, said he expects about 3,000 people over the holiday weekend for the convention.

“We have dozens of incredible events planned for fans of this holiday classic,” Siedlecki told AOL News. “It will be our biggest convention yet, including rides on the firetruck that came to the rescue in Flick’s famous tongue-on-the-flagpole scene, meet-and-greets with many of the stars from the film and lots of other ‘Christmas Story’ surprises.”

Specifically, convention attendees can expect appearances by seven original-cast members (Flick, Scut Farkus, Randy, Grover Dill, Miss Shields and the two evil elves), a BB gun range in the backyard of the house, a downtown tree-lighting ceremony and much more.

The convention will take place at the Renaissance Cleveland Hotel and coincide with Cleveland’s Winterfest, with frequent shuttles to the museum for special tours and activities.

Also, for anyone visiting the “Christmas Story” House and Museum during the end of November and through December, a special guest will be in attendance.

“Ian Petrella, who played younger son Randy in the film, will actually be living here at the house through the holidays, so anyone who shows up for a tour will be able to chat with him and get autographs,” Siedlecki said.

The good news is that Cleveland is about a 6 hour drive from Chicago, so you can easily get there today in time to meet the stars. But, if you miss them you can still go before Christmas and feed Ian Petrella. Because, if memory serves me right, that kitchen wasn’t in the best of shape 27 years ago.