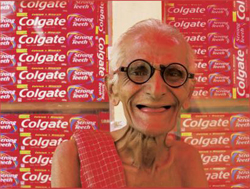 So, you’re a comedian. You find out you’ve got three months to live. You create a bucket list. Even though said bucket list is sad and pathetic. Really, if dressing like a pantomime chicken and taking your grandson to a soccer stadium in Villa Park is on your list, your life wasn’t all that interesting anyway.

Nevertheless, you spend your life savings on living it out only to discover, 2 months into it all, you’re fine.

Comedian David Ismay, who’s popular in England and nowhere else, had just this scenario play out for him. As reported in Australia’s Herald Sun, he’s stuck with a Mercedes and has an obligation to appear in a panto (pantomime theater).

When Dave Ismay was told booze had left him with deadly liver cirrhosis and that he had just months to live, he was baffled, having never been a particularly heavy drinker, The Daily Mail reports.

But faced with the devastating diagnosis, the former TV comic decided there was still much he had left to do.

He immediately started a ‘bucket list’ – a list of things to do before he kicked the bucket – only to find that 10 weeks later doctors had got his diagnosis very wrong.

Dave did not have cirrhosis of the liver caused by alcohol, but in fact was suffering from a treatable hereditary condition called haemochromatosis; an overload of iron in his blood.

Dave, 64, from Ashby-de-la-Zouch in Leiceistershire, said: ‘To be told you only have three months left to live really focuses your mind and brings everything into perspective.

“All the things that you said you were going to do but never did suddenly seem really important.

“When I got back from the doctors the first thing I did was sit down and write my bucket list – the list of things I wanted to do while I was still around.”

The concept of a bucket list was popularised by the film of the same name starring Morgan Freeman and Jack Nicholson about two friends who decide to fufill their life ambitions before they die.

The list included simple ambitions like taking his three-year-old grandson to Villa Park and also playing golf at The K Club, in Ireland.

But the list also included more outlandish aspirations such as appearing in panto and owning a brand new Mercedes.

“I know it’s a lot of money, but I figured if I’m going to go I wanted to go comfortably.”

He also completed a book about his life on the road with one of Britian’s best-loved comics, called Bob Monkhouse Unpublished.

That’s right, his life’s greatest ambition was to write the life story of someone else. Seriously, how weak is that? This guy should have just dumped the price of the Mercedes into a local charity and called it a day. After all, we all know that he’s never going to take that thing over the legal speed limit. Hell, a guy like that may not take it out of the driveway.

Anyway, I Googled some of his bits and, except for this story, none of them are very funny. So I’m going to turn the floor over to another Brit, Ed Byrne, for a detailed explanation of irony.