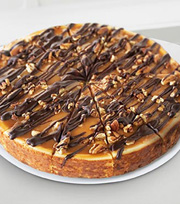 Well it’s holiday time, and you know what that means? That’s right, DESSERT. Ok, maybe not for everyone, but who can resist when dessert is put on the table after a good meal. So, for this installment of classic Nude Hippo I give you Andy Martello as he checks out the Eli’s Cheesecake factory.

piece having worked at the Eli’s Cheesecake factory for a short time. My job was in the cutting department. After the cakes were decorated, they were taken to the freezer to be stored overnight. I would come in at 6am and the cakes would  be ready to cut. I would cut anywhere from 700-1,000 cakes a day depending on the size. My favorite one to cut was the Reese’s peanut butter cheesecake. You see if a cake somehow was not cut properly, we had to damage it. The good pieces were taken to be put together in mixed boxes of cheesecake. The bad pieces couldn’t be sold and thus we would snack on them.

One of the other fun parts of my job was when there was nothing left to cut. I would then go work on the line with a guy named Henry. Henry for some reason always would crack on me for one thing or another. He made the job fun and he always made me laugh. I enjoyed my time at Eli’s Cheesecake factory. To this day it remains one of the best places I have worked. The discount wasn’t bad either.

Just some random notes for you here. Eli’s Cheesecake was introduced at the Taste of Chicago in 1980. It became the festivals most famous dessert, with over 2 million slices sold to date. They made a 2,000 lb cheesecake for Bill Clinton’s inauguration in 1997. They also made a 500 pound one for Barack Obama in 2009.