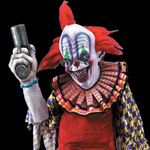 You might want to save that last link for when you have some ‘alone time’ as it does contain some graphic images.

Add in Killer Klowns from Outer Space, Evil Clowns, such as Stephen King’s It, Insane Clown Posse and – I would be horribly remiss if I left out Heath Ledger’s re-imagining of the Joker in the Dark Knight series – you get the distinct impression that there are people who have issues with clowns.

Believe it or not, I’ve only scratched the surface.

So I guess it should come as no surprise that a man wearing a clown outfit attacked a senior citizen while she was on the toilet. It should also not be much of a stretch to believe that Fox News broke the story.

What do you do when a clown breaks into your home and takes your money, jewelry and car? If you’re Jacqueline Cutright, 70, of Akron, you keep your sense of humor, especially when the crime goes down the way it did around 2:00 a.m. Saturday.

“This character in a clown mask threw open my bathroom door, I was on the commode, so it was kind of a surprise,” Cutright laughed while reliving the story for Fox 8’s Lorrie Taylor.

Police said the man behind the mask was Cory Buckley, 22, of Akron. He allegedly broke in through a basement window armed with a knife. Cutright said he ransacked the house and demanded her money and drugs.

“I said, ‘Boy, did you break into the wrong house, a poor person lives here,'” Cutright joked.

Cutright said Buckley told her he wanted Oxycontin and cash. He took $28 from her purse and about $1,000 worth of costume jewelry. The elderly woman said she thought Buckley was going to take a small silver bracelet a friend had given her. Instead, she said, he read the inscription and returned it.

“The bracelet said, ‘A mother holds her children’s hands for a while but their hearts forever,’ which I think is lovely, and when he read that he gave it back to me. That’s when I thought, ‘This man’s not going to hurt me.'”

Buckley took off in Cutright’s 1991 Ford Escort. According to a police report, he only made it to the end of the street. As police responded to Cutright’s 911 call, they reported seeing Buckley roll her Ford Escort twice and crawl from the window. They said he confessed after his knife dropped from his pants pocket onto the pavement in front of them.

After his clownish behavior in her home, Cutright is wondering if she could have taken him herself.

“I thought about doing some ninja stuff to him but I thought, ‘No, he’s faster than I am,’ so I more or less just sat there on the lid.”

I guess we can add ‘ninja grannies’ to the list of things that aren’t quite what they used to be. But, then again, neither is ‘clowning around.’