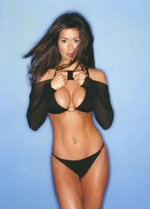 Ever since pre-history people began walking upright men have noticed women are different. And, like all things that bring pleasure, these differences were vigorously celebrated. As evolution wound its way through the millennia the differences between men and women grew more pronounced. And the more pronounced they became the more each side was attracted to the other. Men imbued with strength and the ability to feed their families became the sought after members of the tribe. Women who showed signs of being strong breeders, robust hips and breasts, became the matriarchs.

But, now, the very foundation of evolution itself is being threatened by some psycho group of man hating thugs who probably want insects to take over as the dominant species. These deviants are attempting to cover the gloriously developed result of natural selection.

These terrorists are demanding that women wear a boring camisole like item under their shirts, and pinned to their bras, that would effectively render one of the most magnificent sights known to man into a barely remembered rumor.

Clearly these demented fanatics need to be stopped.

The daft denizens of all that is cold and heartless have a name; they call themselves Cami Secret.

Even their name reeks of evil.

All right thinking people should immediately boycott this company and pass the word along to their friends.

Oh, and ladies, you have a vested interest in this too. Should these radicals succeed in their maniacal quest, then all those men with ripped abs and oiled chests whom you love to admire on those calendars you think we don’t know about will all eventually be covered in burlap.

Support all that is right and good, boycott Cami Secret.

or click here to watch the parody
(viewer discretion is advised)