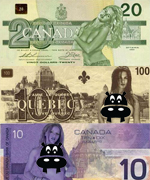 “For the love of money is the root of all evil: which while some coveted after, they have erred from the faith, and pierced themselves through with many sorrows.” – 1 Timothy 6:10.

As you may have noted, there are slightly differing views on money and its inherent value. You may also have noted that I’ve actually read the Bible. Life’s full of surprises. But, rarely do we get the chance to truly inspect how the latter view can lead to the former. If only for one brief, shining, moment.

1 October 2010, ARIZONA | The Grand Canyon, one of the seven wonders of the world, recently welcomed home the soul of one of the witless wonders of the world. The death of a 42-year-old California man named Andrew, who was leaping from outcropping to outcropping on the South Rim near Pipe Creek Vista, reminds me of an incident in March 2000 involving a “financial entrepreneur” visiting the famous National Park.

Because of the tiresome problem of tourists farting their way into disaster, the more treacherous overlooks in the Grand Canyon are protected by fences and signs. All of these overlooks are spectacular. Some have towering columns, some have small plateaus that tourists toss coins onto, like dry wishing wells.

One entrepreneur wished for financial success. And there in front of him was a means to an end. He had a brilliant, an obvious, idea. No stranger to danger, the man climbed over the fence with a bag, leapt to one of the precarious, coin-covered perches, and filled the bag with booty. Harvest time!

But. When he tried to leap back to the safe side, he went head to head with physics. Specifically, F = mg. Our entrepreneur had increased his mass, and the force required to lift himself against the pull of gravity was now greater.

The heavy bag of coins arrested his jump, and the birds were treated to a view of his long plunge to the valley floor below, followed by a shower of coins. Brilliant idea with a fatal flaw in the execution.

Gravity. It’s not just a good idea, it’s the law.

The more lucid among you may have figured out that he could have avoided his ignominious plunge into infamy had he first tossed the bag over the railing and then followed. Of course, like the legendary monkey with its hand trapped in a jar because it wouldn’t let go of the ball, that level of foresight clearly eluded the lately departed, if not lamented, financial entrepreneur.

On the other hand, one must wonder how good this guy was with money if he was scavenging quarters off a cliff for fun and profit. To be polite, I’m guessing that he wasn’t the brightest flame in God’s candelabra.

So there you have it, little Timmy was right all along.