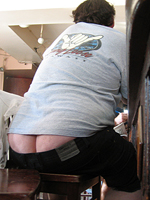 Plumbers are, by and large, a vilified yet necessary part of our society. Often portrayed as slovenly, with a butt crack exposed to the air, they are not the first genre of workers most women would drool over. Not like they do TV Producers anyway. Plus, given the nature of the elements that plumbers are usually dealing with, well, let’s just say “cologne” is not the first thing you smell when they are near.

Nevertheless, AOL News’ reporter Monica Garske thinks that image is about to change.

For the fifth year in a row, LR Services Plumbing — a family-operated company that services the Los Angeles area — has released a sizzling-hot wall calendar featuring its finest employees.

The provocative pages of the “The Plumbers” 2011 calendar are filled with sultry, seductive images of men at work. After taking one look at the spreads, it’s likely that you’ll never look at plumbers the same way again.

The men of LR Services Plumbing have just released their annual wall calendar proving that plumbers can, in fact, be sexy. No extra pudge or butt crack here.

“Our goal is to change the way you view plumbers,” Leonard Redway, president of LR Services Plumbing, told AOL News. “We’re different not just in the way we look, but in the way we work — from our training to our professionalism on the job.”

Redway, a fourth-generation plumber who founded his business at the age of 17, came up with the concept for a fit, clean-cut crew of young plumbers back in 1997.

“I wanted to set my company apart from the rest, so I decided to get us nice, tight-fitting uniforms with clean lines. I started saving my money to produce a calendar featuring our guys and was finally able to make the first one in 2006. We’ve been making the calendar every year since,” explained Redway.

Redway, now 31 years old, said that when he started showing up to customers’ homes for plumbing jobs, people would look him up and down and often compliment his good looks.

“They would tell me I didn’t look like the kind of plumbers they were used to. That’s when I decided my company would try to change the way people see plumbers,” he said.

Redway is one of the featured models each year in “The Plumbers” calendar, and admitted that by now, he’s an old pro at the sexy photo shoots.

He said his signature spread is the month of April, which happens to be his birthday month.

This year’s calendar — hot off the press as of this week — also features Redway as Mr. December, holding a very suggestive pipe wrench between his legs, clearly at your service.

Yes, these men are ready to lay pipe and plug your leaks. They’re even willing to help adjust your backflow and release the strain on your compression valve. If you want to have your very own copy of the calendar, since the young men don’t personally service Chicago, just click on Monica’s link above. She has all the info you’ll need. And, bonus, a portion of all proceeds goes to the Jenesse Center for Domestic Violence in LA.

As Monica notes, “Sexy and generous? They really are every woman’s dream come true.”