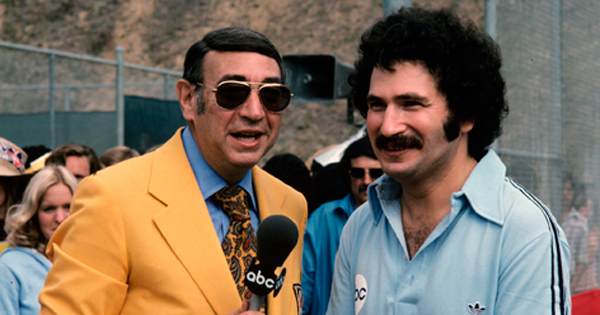 When I was young, I had my allegiance to certain TV shows and with that, the characters on the show; Bo Duke, Fonzie, John (from Chips), Wonder Woman, Joe and Blair, Nell, Laverne & Shirley.  I sometimes wonder if kids today are just as loyal to characters on certain prime-time shows.  I think one reason I honestly had such an affection for these characters is because I really felt like I knew them as people because of events like Battle of the Network Stars (and even Circus of the Stars).  Do you remember these shows?!  How fun were they?!  It was like the celebrity Olympics!  I absolutely *loved* watching these TV events and it just makes me wonder why the networks don’t they do these anymore?!  Yes, yes, I know there is now Dancing With The Stars but meeeeeh, that’s just not the same.  Having retired athletes and C & D list celebrities on today’s shows to try and regain some sort of public attention just isn’t the same as watching celebrities at the top of their fame compete against one another (such as Epstein from Welcome Back Kotter winning the race for ABC as Howard Cosell, the most beloved sportscaster in America tries to interview him with Wonder Woman and Barney Miller excitedly celebrate around them as seen in the video below):

It was a genuinely exciting event all done in fun and good sportsmanship.  But it really does make me wonder why we really don’t see that kind of camaraderie between television show celebrities anymore.  Is it an ego thing?  Is it now viewed as not a “cool” thing to do?  Do they not have the time for such extracurricular activities because of their overly busy lives?  (Sidebar:  One of my biggest pet peeves is when

a TV celebrity is asked on a talk show what other TV shows they like and they answer “I don’t watch TV”.  To me, that’s like asking Bill Gates about Apple products and him saying, “Oh, I don’t really pay attention to that stuff”.  They just sound so stupid, not to mention arrogant.  Know your industry idiot.  But I digress…)  Or is it simply just that with all the competing cable channels nowadays, there isn’t that big 3 network loyalty that there used to be (not to mention the stable of purely sitcom TV shows either).  It’s kinda sad to me, because to this day I hold a lot of affection to the TV stars that I looked up to in my youth.  CLEARLY demonstrated in the picture below at my ridiculous excitement when I got the opportunity to interview my childhood heartthrob Bo Duke.

Click here to watch my interview with John Schneider!