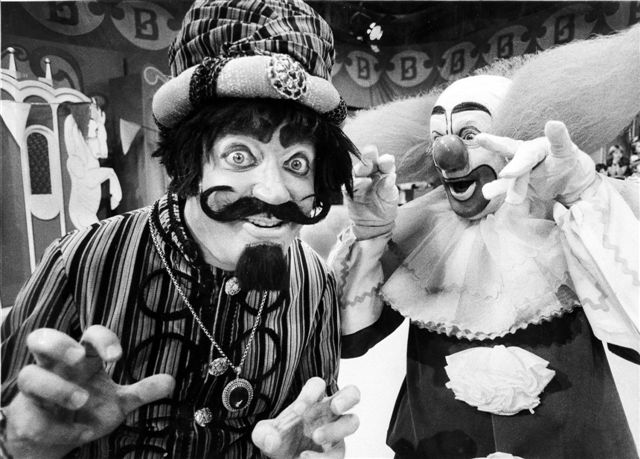 As a child, I watched many a program on TV, but none was more fun than watching “The Bozo Show” on channel 9. For those who don’t know, Bozo was a variety show geared towards children. I remember it running at noon time and then switching to mornings at some point. Nonetheless, it was a very entertaining and fun show to watch as a kid. There was the Ringmaster, played by Frazier Thomas. Bozo the Clown, played by Bob Bell and Joey D’Auria. Cookie the Clown, played by Roy Brown and quite possibly the strangest character ever on a kid’s show, a magician named Wizzo, played by Marshall Brodien.

I recently came across some old “Bozo Show” footage given to Nude Hippo by Marshall Brodien. The footage was old bits that Marshall had performed as Wizzo. One of his trademarks was a stone he wore around his neck that gave him the power to do magic. Everytime Wizzo would do a trick, he would rub the “Stone of Zanzabar” on the object and then in a spooky voice he would utter “doodie, doodie, doodie, doodie.” As a child I thought this was funny, but now as an adult I think he may have escaped from an insane asylum.

Also, during these bits Bozo and Cookie would take personal shots at Wizzo. One particular exchange had me rolling on the floor laughing. Marshall as Wizzo was doing a trick about pouring milk through a newspaper. Cookie asked a question, to which Wizzo answered “The stone told me, I get little signals from the stone. People think I don’t understand.” Then Bozo shot back with “I think you’re about half-stoned myself.”  As an adult I enjoyed these witty jabs, but as a child, they flew right over my head.

One of the other things that I remembered was actually meeting Marshall Brodien back in 2001. He was signing autographs at the Museum of Broadcast Communications along with other people from Chicago children’s television past. It was really neat to meet someone who had been a part of my childhood TV viewing. You have this idea of a person being larger than life. I mean he was on TV, he must of had money and fame and all that goes with that.  At least that is what I thought at age 7. Then, you come to find out he is just a regular guy like the rest of us. One other fun fact about Marshall is he was the pitchman for TV Magic Cards; they sold over 17 million decks.

Marshall is still entertaining to this very day.  He makes appearances all over the city and suburbs. He also designs magic sets for children and has written an autobiography entitled “The Magical Life of Marshall Brodien.” Still to me he will always be that crazy wizard who once got stoned at the Zanzibar.