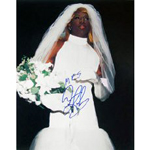 On a day that find the Hippo’s music critic finally talking about a band that I’ve been raving about for months, and a day after the Bears beat the NFL equivalent of a Girl Scout troupe, I decided I could use a little love. Not a lot, just enough to get me by.

I’m sure you’ve felt the same way at times.

Fortunately, as it turns out, I need look no further than my mirror. Because, as we all know, loving one’s self is the most pure form of love there is. Not since Dennis Rodman’s zany NY PR stunt, or the Million Masturbators March, has this been point ever been more clear.

Taiwanese native, Chen Wei-yi, married herself in a beautiful ceremony surrounded by friends and loved ones. As reported in The Montreal Gazette, she did it for all the right reasons.

A Taiwanese woman said Sunday she had “married” herself by throwing a wedding banquet.

The 30-year-old Chen Wei-yi, who has been an Internet sensation since announcing her “wedding” plans last month, held the ceremony in a Taipei hotel Saturday witnessed by 30 relatives and friends.

“Marrying myself is a way of showing I am confident and upbeat and that I accept myself for who I am,” said Chen, who is an office worker.

“We must love ourselves before we can love others. I must marry myself before marrying the special someone,” she told AFP.

Chen’s supporters have hailed the move as “creative,” with some suggesting a group wedding for those who wanted to “marry” themselves, according to her Facebook page.

Taiwanese authorities have said many women now choose to marry at an older age or to stay single, which is seen as a major factor causing the island’s birth rates to dwindle to one of the world’s lowest.

A record low 117,000 Taiwanese couples tied the knot in 2009, down nearly a quarter on the previous year, according to government figures.

Either way, it seems the lovely Ms. Wei-yi, has it all going for her.

With those caring thoughts in mind, I think I’ll retire to my private lair and remind me how much I love me. You should try it too.