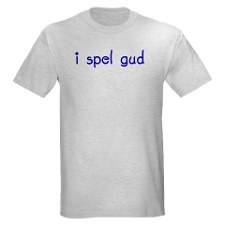 There is a reason you can not edit with spellcheck. While a computer may know all the fun words you may wish to use, it has no clue about the differences among the variations. It can’t choose between there, they’re or their. Nor can it differentiate from here or hear. At some point you need to be smart enough to know which permutation to use to make whatever you are writing make sense to whomever is reading.

Some people never learn that lesson.

Bruce Vilmetti, of the Milwaukee Journal Sentinel, tells the story of a lady who will probably serve 20 or so years in prison for a spelling error.

Oh, sure, she committed a bunch of other crimes, but it was the spelling error that caught the court’s attention.

Kristine Flynn, 52, pleaded guilty Friday to three counts of trying to impersonate a Fond du Lac County circuit judge. With a habitual criminal enhancer, Flynn faces up to 22 1/2 years in prison at her sentencing next month.

According to the criminal complaint, early this summer Flynn wrote out two documents titled “NOTICE” and one titled “ORDER AND DECISION” at Taycheedah Correctional Institution, then had another inmate type them up. The documents purported to terminate a guardianship for another inmate’s 12-year-old son and turn the boy over to Flynn, “his adoptive father to be,” and order police to help Flynn “retrieve” the boy and his bank accounts.

Each document carried the signature of Circuit Judge “Steven Winkie,” in handwriting several people identified as Flynn’s. The judge’s name is Steven Weinke.

In keeping with Nude Hippo’s policy on journalistic transparency, I should note that I have family in Fond Du Lac and some of them have the last name Flynn. However, this particular Flynn is not from my tribe.

Thanks to matriarchs like my grandmother, everyone of us can spell. Also, we show an innate tendency to avoid lengthy jail terms. Not because we’re saints or exemplary citizens, but because we go to our graves knowing that said matriarchs would brain us with a broom if we did anything that stupid.