You are here: Home / Greetings from a pseudo-newbie 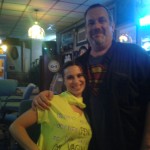 A long time ago, in a land that was pretty close to where I’m sitting now, I got coerced into joining the troupe that made up The Big Fat Nude Hippo Show of its day. That incarnation was akin to Ed Sullivan on acid. A bizarre mix of comedy, live music, cooking demonstrations, celebrity interviews and occasional poetry, the show was as addictive as it was uneven.

During that time I was conned into participating in a second Lossano production called You Think!?!  A round-table discussion show where the panelists had a wide variety of experiences to draw from but none of which seemed relevant to the topics at hand. My participation in that show came to a gleeful conclusion when I was parked aboard a fire boat at 6:00 AM on a Sunday and not allowed to have coffee. My commentaries were so profane that Tony was forced to take the least offensive thing I’d  said, “Damn Skippy!,” and edit it over the majority of the show.

The result was this lovely homage to the English language; “I Damn  Skippy want Damn Skippy some Damn Skippy Damn Skippy coffee right Damn Skippy now!” I believe that Tony Lossano still uses that episode as a training video on what not to do to people at 6:00 AM.

Nevertheless, time marched on, the Hippo Show matured, I didn’t and we all went our separate ways.

Even so, I’ve stayed friends with some of the cast through the years and have managed not to offend them too often.

As Tony will be the first to point out, my life has been different than yours. I’ve spent almost 30 years in the entertainment industry and have worked on hundreds of projects in that time. Some famous, some infamous and some just godawful. It’s the nature of the beast.

I was trying to think of a way to make that point cleanly when I noticed the recent post of the slumber party / pillow fight that featured Ashley Lobo & friends. It was cute, safe and nice. There were cheese puffs and a chick flick involved. Moms the world over would have approved.

Back when I was a younger man I wandered into a couple of young ladies having a slumber party / pillow fight in a cheap hotel. About an hour or so later, when the police arrived, I was able to utter (what became) a rather infamous line; “Of course I’m naked! Look at them!” The police officer, to her credit, was able to get out “You’ll just have to, please, keep it down…” – a command I was clearly incapable of obeying at that particular moment – before she burst out laughing.

No cheese puffs were involved. But, as noted above, my life’s been different than yours.

I also can’t see any moms approving of that particular Kodak moment.

So, I’ll be bringing you my peculiar take on news from around the world, occasional updates on what’s going on in my life and, if I get it right, stuff that makes you think..