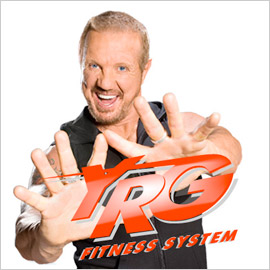 Gina Ferraro here! Diamond Dallas Page, the legendary professional wrestler, who lent most his years to WCW taught me how to perform the move he made famous:  The Diamond Cutter.

The man is full of personality and ready to have a good time– but when it came time to chat about his yoga program he put his game face on. Page has developed a workout DVD program called “YRG,” short for Yoga for Regular Guys. He said this program is about holding back the hands of time.

Page went on to say yoga itself wasn’t intense enough for him so he’s added in, “Some old school calisthenics, Pilate’s, mixed martial arts, and dynamic resistance” to his program. Page said YRG focuses on, “Engaging your muscles, jacking up your heart, and getting in a fat burning zone while standing still.” The program wasn’t originally intended for weight loss, but many of its viewers boast about their new trim bodies.

I was lucky enough to get to participate in a YRG class taught by DDP & it was amazing. My body felt better after just one class!! His intensity during a class really gets you amped up. Go to Diamond Dallas Page’s site to order the DVD today. I personally suggest it!