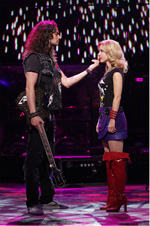 Grab your Aqua Net, spandex and your wanna-be rockstar boyfriend and get to ROCK OF AGES.   The 80s are brought back to life with the Broadway musical that will have you hair whipping , singing along and rocking out at the Bank of America Theatre. I loved this show, but if you are not a fan of the 80s, sex, drugs and rock n’roll you might be offended for it’s not your typical Broadway show.  With that disclaimer; it was truly AWESOME, clever and witty!  All of my favorite 80’s songs were incorporated to tell the tale of a love story.  The short denim skirt wearing Sherrie; Rebecca Faulkenberry, ventures off to the Sunset strip to follow her dreams as an actress.  While taking a job at a local bar she meets Drew; American Idol’s Constantine Maroulis, who wants to be the next big rock star.  They soon realize they veered off course of their dreams, but perhaps they were meant to be together. It was comedic genius how popular 80’s music would tell a story with artists such as Journey, STYX, White Snake, Foreigner and Bon Jovi to name a few.  Their rendition of the songs will pump through your blood like an incredible rock concert and make you wish you had ten of your friends to party with.  Therefore, I’d suggest this show not only for a date but a large group.  It’s a rad way to kick off your evening and they even have cocktail waitresses serving beer for the first act.   With incredible voices, actors, nostalgic 80s costumes and provocative booty shaking you will forget it’s 2010.  You have to move fast because this show is touring across the country.  Rock of Ages closes in Chicago on October 3, 2010 and it’s next stop is Boston.  I need to dig up my leg warmers and pop my collar because this is one show I’d consider becoming a groupie for.